Who Were You With Last Night? 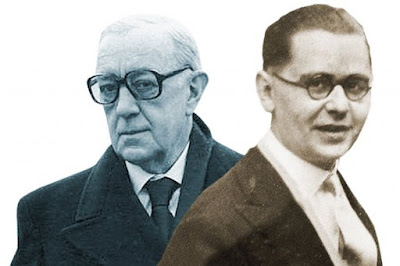 Roaming the channels for something, anything, of interest, came across a programme on Sky Arts which was two hours of David Cornwell, otherwise the author, John le Carre.

He was giving a talk about his life and times and writings to an audience at the Royal Festival Hall following the publication of his latest book, "A Legacy Of Spies".

After an hour of his talk, clips of actors talking about their roles in TV and film work of his books was then followed by an interview with John Snow. He has given interviews in the past and there is a good deal of material about on his life and career there were few surprises.

What interested me was the working conditions of the relevant security HQ's, how they were more or less organised and in particular what went down to the archives, all those reports and comments on reports made up and down the layers of management.

Much of the archive is already history, but not one perhaps that anyone living now will have any access to. It is for any future if there are then any historians or any archive left. It is a feature of the past that there has often been intended or accidental destruction of materials of value from their history.

But what history? When le Carre was doing his own scribbling and note taking at work, he was not the only one writing fiction. But he admits that often in his reports he was imaginative rather than factual and sometimes his analysis or opinion was off the cuff rather than thoroughly researched.

The picture above is of the actor, Alec Guinness, who played the fictional George Smiley created by le Carre. But was he "created"? The other man is John Bingham, 7th Baron Clanmorris, 1908-1988, who worked with le Carre who also wrote fiction, thrillers, detective novels and spy novels alongside his reports and is alleged to be the model for Smiley.

Even where his reports were honest, they might contain material from others which was uncertain, theoretical or guesswork. So how much of it is "real" history and how much just a pile of documents from the last which tell us little more? Yet this was a part of government that was supposed to be critical, albeit small, but with substantial importance for policy and action.

If around the desks of the higher echelons of the civil service there were others writing fiction or making it up as they went along and if the evidence is thin or unconvincing soup it up to get the decision you would like or some friends would want?

From Westminster move around The City of London  and the major corporations where you would expect perhaps tighter control and detailed study, if only because big money is involved. In recent years it seems to be no better. They are not interested in future history. They have very different priorities.