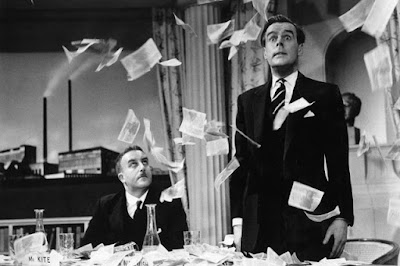 The head ringing with the seasonal specials, carols ad nauseam and the rest, decided to go back to the past and watch one of the Boulting Brother's comedies from the 1950's. In this case it was the satirical film "I'm Alright Jack" about the state of industrial relations at the time.

They were inclined to the Left, so the boss class is very apart from the workers but even they do not come off well. The bosses want loot by whatever, including criminal, means. The workers are a lot of skivers, doing as little as possible to extract as much as possible through their trade unions.

But the workers are led by Fred Kite, played by Peter Sellers, an ultra Marxist Leninist believer in the Soviet Union who lives for the day when the workers will overthrow the boss class and become the bosses themselves. Sellers character was alleged to be too close for comfort for many on the Left at the time.

But seeing the film, just who and what were the actors? We tend to think of actors as being people of the roles they played. If someone was always a toff on screen, then they were upper class, if always something else then that is how we saw them in real life.

Irene Handl who played Mrs. Gladys Kite wife of Fred, is a case in point. Her typecast role was usually that of a working class East End woman or wife. But in fact she was from a family of Austrian migrants who had been in banking.

Margaret Rutherford on the other hand, usually playing upper class roles was of one of the higher classes, notably the Benn family. The idea of the politician Tony Benn being closely related to Margaret Rutherford is intriguing. In the film Margaret was the rich aunt of Stanley Windrush on whom he depended.

Dennis Price, who played the top boss, playing a gentleman with a touch of evil, was of a higher class of family as well, the son of a Brigadier who married a wife from a leading family in the judiciary. Perhaps this gave him that extra touch of polish in many of the film roles he played.

On the other hand his associate in the film called Sydney Devere Cox is a lower class shifty spiv who cannot escape his origins. He is played by Richard Attenborough, a Leicester grammar school boy, whose family were certainly from the lower orders, albeit with a father who had climbed the academic social ladder. Cox in the film is the man to hate and the man most on the make.

Peter Sellers himself, in his acting work something of a chameleon who managed many very different characters, came from a mixed middling background with a colourful history in parts. They might seem to have been ordinary, but not quite, and what their further background might is an interesting question.

Then there is the comedian Terry Thomas, who played over the top posh types equipped with an ignorance and stupidity to match the arrogance. But he once worked as a butcher boy in the family firm of Smithfield butchers in London. Interesting experience it would have been but not upper class by any means.

Last but not least is Ian Carmichael who played the lead role of Stanley Windrush, posh, polished and upper class who lost his way in the turmoil of real life. He was typecast in this kind of role and was the man to have if you wanted an upper class idiot. But this is not at all what Carmichael was.

In a world of war films of the Second World War, we think of all the actors who played heroes of their time. Ian did not play these roles, but in real life he was a war hero. He served with the 22nd Dragoons in one of the most dangerous spheres, the flailing tanks used to clear a path through mine fields.

When the troops went in to Sword Beach on 6 June 1944 he was among the first in. As his division, the 3rd Infantry Division, the Iron Division, fought from Normandy to Bremen it suffered heavy casualties. Carmichael included, luckily minor.

But what of his family? They are not of the upper orders. His paternal grandparents were from the port of Greenock in Scotland, on Clydeside, a bottle's throw from Glasgow. Greenock was a rough old place then, and the man an insurance agent, no doubt kept very busy with the claims. Were they mariners before that and if so where did they sail to?

The maternal ones are English, way back a hatter from an extended family in Oxfordshire from around the boundary with Warwickshire with some being, yes, Ag Lab's. Think of Flora Thompson and "Lark Rise To Candleford".

All the world's a stage.