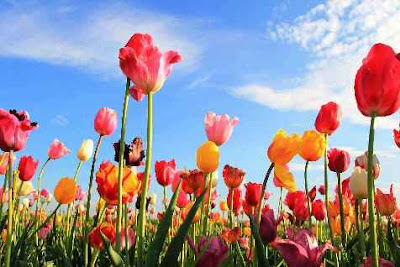 Followers of finance will know about the Bitcoin bubble unfolding on the world's markets. Here we go again, and the recent crash was said to be the last one of its kind.

The picture above is one of tulips, a lovely flower, but in the 17th Century Tulip Mania (put that into search for Wiki' and many more items) was the maker and breaker of markets and economies.

The first item on this blog back in 2009 was on the question of how things can go wrong, and so they did.

So after we cut each other’s hair, normally free, gratis, and for nothing, this time we exchanged cheques for £1000 each.  “There,” she said, “that’s a nice boost for the GDP”  “But what do we do next?” I asked, and she had an answer for that, well she always does have an answer.

So we go down to at Thresher and Porbeagle Financial Services, Cookiecutter House and meet a gent’ called Fred Sands.  Nice chap, the sort of Scottish burr in the voice you like to hear on the customer services help lines telling you there is nothing they can do to help, who makes us an offer we could not refuse.  They had only just set up after he had left his old firm to improve his prospects.

Grabbing the cheques from our hands, he told us he could immediately lend us up to £100,000 to spend as we wanted, or to take part in a wonderful investment deal that had only turned up on his laptop that very morning, limited offer, closing in half an hour, so we had to make up our minds quick.

We will not be sending Christmas Cards.