Three Men In A Library 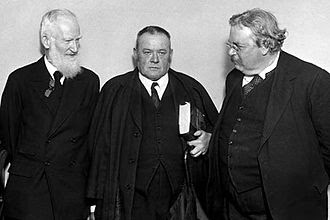 The three men in the picture above, born variously in Dublin, by Paris and in London, were among the leading and best known writers and public figures in the first half of the 20th Century.

They are now forgotten and their books gather dust on the shelves of libraries if they are not already packed into boxes in the cellars or have been disposed of.

They were prolific in their writing and in public meetings and debates. Can you name them and more to the point know what their ideas were and the various beliefs they held?

Which of them now would be hounded out of our universities and public bodies and forbidden to express their opinions and for what reason?

Which of them said "the faith is Europe and Europe is the faith"?