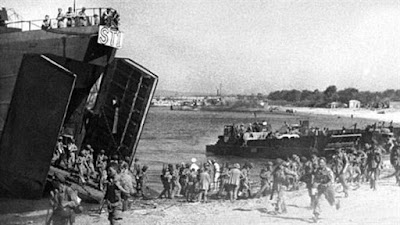 Over a Christmas and New Year holiday period there are many questions. For quite a number of people one will be the films to watch and when and why? Now it is possible to chose to watch only when you want to and there is a wide choice, new, recent, past and almost archive at the click of a remote.

No longer do families gather round to watch what is trumpeted the films that they must or are expected to watch. We can all do our own thing. If I want the Muppets or Shaun The Sheep, and the lady wants the films she missed in the past then we can do just that.

One film that turned up on BBC2 in a late afternoon slot was one from the antique shop, a couple of hours of World War 2 from the mid 1950's and a major intelligence caper. It is difficult to know who would actually want to watch it now but I had my own reason.

The film was "The Man Who Never Was" from 1955-6, 20th Century Fox doing British, about high ups in counter intelligence putting one over on the Nazi's using a dead body and false documents. The purpose was to persuade Hitler etc. that in 1943 the Allies would be going for Greece and not Sicily, the obvious choice.

My reason was that in 1956 I saw this film in a German cinema with German subtitles in a garrison town in north Germany. What the locals made of it I do not know, there were not many of them in the audience. Not many troops went either, despite the garrison having a Royal Signals Regiment.

What I wanted to know was how much of my memory about it was "false" or bad as well as how much stands up to inspection in the light of later knowledge. There is a Wikipedia article on the film with links to the people involved and also a website about the later revelations as to who the person might have been whose remains had been used.

One relief about the older films is that you can hear the speech and the takes are longer. For the speech, did people really talk like that? Did they really behave like that? The film "Patton", made later, also deals with the Sicily question, but the Brit's shown are very much a caricature. In this film they are rather nearer the truth but how near?

As the Wikipedia article says, the film did depart from the truth, notably in the use of Irish Catholic spies working for the German's. Perhaps it was a dig at the time at the republican De Valera's studied politeness to the Germans, perhaps arising from Hitler's support for Franco in Spain. The audience of 1956 would have understood.

The major aspect that was missing was the absence of much at all about signals intelligence and communication. The Irish spy uses a radio to tell Berlin what he is doing using a very crude system. Nowhere is there any hint or knowledge of the extent and nature of the signals intelligence at the time.

But in 1956 this was still a very delicate issue, so the less said the better. Sixty odd years later, it is still a delicate issue. As I am aware because of the way the search engines react to my use and the telephonists know who I am and where I am before I even begin to explain.

In 1956 we believed that we had won the war. What we did not know at the time was that we were losing the peace.