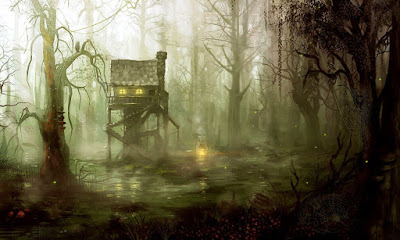 There is a good deal of political talk these days about "draining swamps", the inference being that swamps are bad and the waters, plants and creatures within harmful to our human existence.

But for your average environmental activist they are entirely the opposite. They were the bringers of life to the earth and now sustain many things that are essential to our future. Even, no swamps then sooner or later no mankind.

For extreme activists the elimination of humanity might be a very good thing for Earth or Gaia as you wish. The way things are at present they may not even have to do much since human beings seem hell bent on getting rid of each other as soon as possible.

The "Swampy" who could be relied on to turn up at eco protests in the media against one new build or another everywhere is still around. But some of that kind were a contradiction in that their politics were of the authoritarian left. Some were anarchists, others for the company they chose to keep.

It is said that Mr. Trump has soon given back word on his financial swamp draining, perhaps he has discovered that he is one of the creatures of the swamp who might have to go as well. Or it may be that as the developed world has become one big global swamp that's just the way life is folks.

The latest news is that Mr. Trump has been talking to the Titans of Tech, the current big boys on the block who rule the gizmo etc. world. What he may not realise is that these men are swamp drainers par excellence and out to both defend and promote their interests.

Perhaps the rest of really need a warm welcoming swamp full of the nutrients and liquids that keep us going.