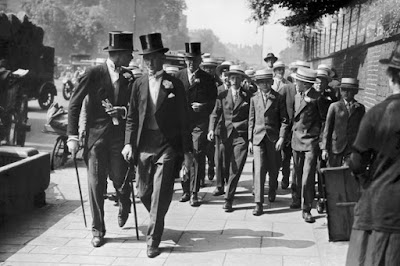 If you ring fence groups of people to prevent them from being insulted, the subject of jests or indeed criticism then if that process goes on you have fewer and fewer to have a go at.

There is no shortage of people who feel that neither they nor anyone like them might be questioned etc.  The trouble is that this leaves you with fewer and fewer groups open to mock or detract.

Simon Jenkins in The Guardian on Pale Stale Males has been bold enough to be one of the first to put his head above the parapet to remind us that old white men have become the target for today and tonight. As a chap well on in years and classified as male, I declare an interest.

A reason for old white males having many senior positions is because they are of a generation when white males were commonly recruited to work which had prospects and many in fact did rise through the ranks to top jobs.

Moreover these are people who did not skive off into retirement ASP like some I know and so lasted a longer time in such jobs. Those days we are told are gone and regarded as rightly so. The future is feminine and foreign and we will be all the better for it.

Having done my virtue signalling for the day, one take on this which caught the eye is from that serious philosophy site The Daily Mash which has the item below under the heading "Old White Man Isn't Sure Why He Isn't Massively Powerful.

AN 81-YEAR-OLD white man is confused about why he isn’t running the world.

Widower Roy Hobbs spends his days gardening and watching documentaries about bridges that got blown up in the war, but he would happily control the stock market and hold governments in the palm of his hand. He said: “Apparently old white men run the world, but I can’t even get someone round to fix my boiler.

“I wouldn’t mind being a business kingpin or head of some secret banking society, making decisions that influence the lives of millions. Not that I’m particularly into those things, but it’d give me an excuse to chat to more people.“A bit of power might be good though.

In my big office I’d be like ‘bring me some Hob Nobs!’ and bang my fist against my massive desk. “Then a young lad would appear with Hob Nobs and a cup of tea that is neither too milky nor too strong.

“But perhaps that level of influence would corrupt me and I’d end up demanding crab paste sandwiches with the crusts removed. That’s when you know you’ve lost it.”

The command of the British Army at Waterloo should have been given to  Kitty Pakenham instead of that dreadful Arthur Wellesley.
Posted by Demetrius at 16:30