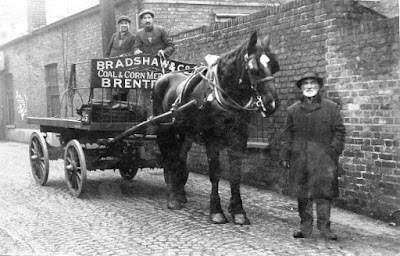 It was strange. On Thursday the 22nd December we had an hour of Radio 3 dealing with Sergei Prokofiev and the problems he had during the Stalin regime with his opera "War And Peace" through the Committees of Culture and their ideas of political correctness. He survived but many intellectuals were being liquidated.

Then we went to BBC1 TV for an hour of "Who Do You Think You Are?", the family history show, this one starred Riccy Tomlinson, the actor comedian. The way in which his story was handled by the BBC would have done any hard line Stalinist proud. Riccy, for those who do not know it is heavy on his Scouser, that is Liverpool, image.

The programme did tell me is that his family history is parallel to mine. He had forebears who were carters and so did I at the same time and in the same streets. He had an ancestor family whose father did young leaving them in dire poverty, so did I. He had an ancestor family living in one of the overcrowded courts off Scotland Road and so did I.

One part of the programme with the stamp of Stalin was that it was said that in Liverpool there was a great divide. Prod's there and in these jobs, Cat's there and in other jobs. Then in 1911 came a Leader, of sorts. A Marxist, Tom Mann, who led the Liverpool Great Transport Strike gave a speech to 100,000 men and at a stroke ended the divide. The workers were united in a common cause and became as one forever.

Except it didn't. T.P O'Connor continued to be voted in as an Irish Nationalist M.P. for the Liverpool Scotland constituency until 1929 and in others it was accepted that a good many worker's votes would be for a Unionist candidate. The divisions continued, strict for some, less so for others, and were still there in the 1940's in my memory.

But the agents for change were not Marxist organisers and speakers. They were the new films and music fashions. The big new dance halls took anyone and everyone as did the cinemas. Then there were two world wars, that went unmentioned. In WW1 tens of thousands volunteered and went to the trenches together. Their chaplains worked jointly, especially in no man's land.

In WW2 Hitler flattened many of the slums which certainly brought people together. You did not ask which faith had which air raid shelter. Then came the Yanks, hundreds of thousands of them through and many around Liverpool. Forget the media depiction. The ones we knew where young, polite and decent men and doing their duty, reinforced by what they saw around them.

To return to 1911 and the late 19th Century, the important bit that the BBC did not mention was that there were major problems in Ireland and therefore in Liverpool as the Nationalists were pressing for change. There was a good deal of violence and what we call now terrorism.

Also in that period the Government did not simply send in the troops. Firstly, any local magistrates and police authority facing civil disorder etc. that it could not cope with could request the local volunteer or reserve military for assistance. If that was not enough  then the Home Secretary would be asked for other assistance.

If it looked dangerous then regular troops would be ordered in. In Liverpool, given the large Irish Nationalist element with some looking for real trouble, violence and major damage to property would have been inevitable.

The Liberal Government Home Secretary was Winston Churchill and Prime Ministerial approval was needed as well as the agreement of the War Minister and the Admiralty, as a ship was ordered to The Mersey. Churchill was cavalry and well aware that putting down riots etc. won many more votes than lost them, especially if they were minority communist and nationalist inspired.

But back to the carting. The BBC could have mentioned that road haulage in the late 19th Century before the age of oil had its structural complexities and in Liverpool was not just about the docks. Firstly, to my mind, there were all those breweries and pubs. However, economically, there were the railways and Liverpool had a lot of them with extensive goods yards.

In the 1960's The Scaffold had a hit song, "Thank You Very Much For The Aintree Iron", which referred to the huge goods and coal yards just over the Liverpool boundary. The programme had a part, said to be in Everton where they overlooked the sea suggesting that the Tomlinson family had "moved up."

Well, it was uphill and the view to the docks was over Bootle. which is not Liverpool. Also Walton beyond Everton was an ideal place for a carting business to be. Easier access all round and closer to sources of forage. As Wellington insisted, no forage, no horses, no horses, no victory. Checking out the detail the population structure on that patch was much the same as on the Scotland Road.

It was at Aintree in the 1860's that Thomas Ferrier did a spell as a railway guard. His son, William, who became a teacher, was born there although they returned to Blackburn soon after. William was the father of Kathleen Ferrier. The BBC did not mention this and "Our Kath" with her broad vowels and bonnet making grandmother is much too posh for them these days.

Also, up in Everton in the 1860's and into the 70's round the corner was a man who became one of the giants of show business, Leslie Stuart, born Thomas Augustine Barrett in 1863, see Wikipedia. The name change was necessary because when he began another Thomas Barrett was famous. Among the many and various show hits he had were other songs, "Soldiers Of The Queen" for one.

Then there is William Godfrey, later Cardinal, Apostolic Delegate, Archbishop of Westminster and formerly Archbishop of Liverpool, see Wikipedia, born in 1889 to the carting family of Godfrey's, a little above mine and Riccy's perhaps. These were cart owners and had teams of their own and were located close to mine and the Tomlinson's, who may have been among their carters or were clients.

A horse and cart was a major investment with heavy running costs, beyond most ordinary carters. It was not an easy trade as the cutting below from the Preston Herald of 25 May 1889 shows. The man killed was George Godfrey, his second son William, the future Cardinal was born five months after his death. 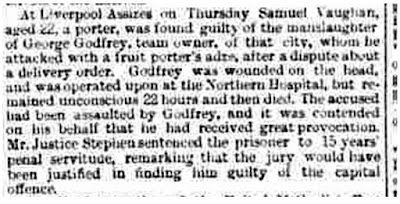 So there we have it, a programme claimed to be reuniting celebrities of the present with at least some of their families of the past. But the past is another place and the people there not quite what we may like or identify with. You can try to put it simply but that has its risks. What I do not understand is the risk the BBC took with the year 1911.

I have posted on this subject before. In the centre of Liverpool that year is the Hitler family working in a Lyons teashop and did Adolf drop in for a few days? Errr, nationalisms? Socialism? Great Leaders and mass movements? Lyons was a tad pricey for most ordinary families, with or without a slice of nice Victoria Sponge, so might not have been patronised by any of our families.

But there might be another part of our mutual heritage. I have mentioned before that in 1881 Karl Marx had Edwin Willis of the leading organ makers as a next door neighbour in London . The Willis firm had a factory in Liverpool close to my and Riccy's forebears. There was a good deal of carting to be done for them.

So pull out all the stops Riccy, I'll hum it and you can sing it.