The Regiment Will Advance 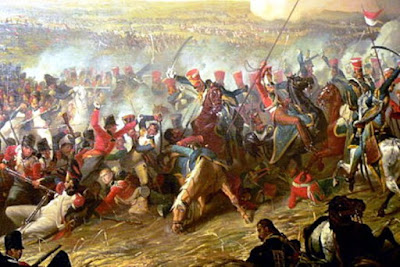 There has already been a lot of material in the media and other places about the 200th Anniversary of the Battle of Waterloo.  Inevitably, the sound of axes being ground rises above the clamour as well as the noise of more or less informed opinion as to it all.

There is no doubt that it was a critical event in the history of Europe and to some extent has defined the history and perception of Europe in the 19th Century.  What is striking is how much else was going on in different places which we have lost sight of.

This could take a long post to do a tour of all these and what were the consequences and effects.  We could start, for example with the major campaign in Nepal in 1815 in which the HEICS, agents for the British Government decided to nibble away at the edges of the once mighty Chinese Empire.

But something else is lost sight of regarding the battle because the attention is on the main commanders and others are relegated to supporting or less consideration.  Just who were the officers on whom Wellington had to rely in the British Army?

If you want a long read try this book The Roll of Waterloo from the archives.  It is a list of all the officers of the British Army engaged in the battle with a lot of supporting information.  It helps to know your military history and how an army functions, but it does tell you a lot about them and their capabilities.

What men they were.  Sadly, we do not have the same for the Other Ranks but have to pick this up in bits and pieces from other sources.  But I have looked at the Muster Rolls for a number of regiments with an eye to who were the men and what they could do.

The later canards about the men who officered the Army and those who served in the ranks need to be forgotten.  The idea that the rankers were drawn from the slums and gaols is rubbish whatever might have been said about some of their habits.

Such men would never have lasted.  My reading is that they were a large sample of the ordinary working population.  Calculation of the proportion of the male population engaged over the many years of war suggest a higher rate than that during either the First or Second World Wars.

Yes, many were labourers or in other trades and liked a pint or gallon and could be a rough old lot when annoyed.  But they were good ordinary men.  Similarly the officers were not fools or fops, such officers would not have lasted or survived.

There were very many hardened, able, experienced men who knew what they were doing and how to do it.  Indeed the commissions were bought and class mattered, but in the field of battle all are equal and these officers were more than up to it as were their men.

We should remember the battle for what it was and the men for who and what they were.  Wellington's combined force was fighting for a Europe of peoples and not one dominated by a French elite.