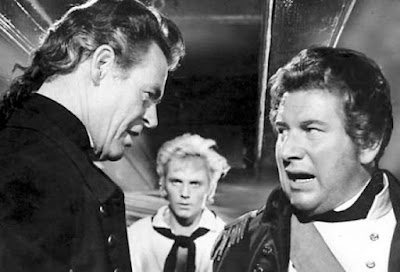 When the fictional poor Billy Budd, see Wikipedia, was pressed for the Royal Navy in 1797 the merchant vessel he left was the "Rights Of Man", which caused him to be suspect.  It is not a happy story and nor does it have a happy ending.

A key theme of the original novella and later dramas, stage, film and opera, is what Rights are and what we understand about them and how they might be applied.  What you start with is not what you get.  What you think are Rights is not the same as others think.

The British Library has an exhibition on Magna Carta as it is now 800 years since it was signed in 1215 at Runnymede between King John and the Barons.  Along with this are lectures.  Recently Thomas Asbridge talked about the role of William the Marshal but an earlier one is of interest.

What exactly does it say is the theme of the talk by Professor Sumption who analyses the content and what has been claimed in later years to be found in the document, here in PDF.  The item is longish but quite clear.  Also, it shows that much of what we believe derives from it simply is not the case.

The question of what are "Rights", who might enjoy them, to what purpose and why has been with us since 1215 and is still a major feature of our politics.  The latest Human Rights Act is just another crossroads on a long and complicated journey.

Whether this time, like other times in the past, a wrong turning has been taken is going to be a source of serious dispute and trouble.