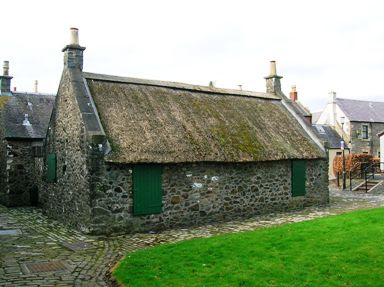 What might seem a small thing can have greater effects.  When Mrs. Peacock knocked the candle over during Hogmanay in a Heckling Shed in Irvine, Ayrshire, (see above) and burned it down she ended the career of a budding entrepreneur in the flax industry.  Also a farmer he had to find other things to do.

The story of his stay in Irvine is here and it is Robert Burns, who went on to other things, notably an Excise Officer with a gift for words and song for which he is better known.  Had he continued with the flax all sorts of possibilities arise.  One is that he may have made his living in Irvine.

But he might have moved on to other places either in Ulster or elsewhere in Ireland or to a part of England where the flax trade and industry was well established.  It was only handful of years later that an optician and clockmaker in Darlington invented a machine to do the messy business of flax dressing.

Had Burns been in the right place at the right time with either capital in hand or access to it he could have become a leading industrialist having the qualities and contacts etc. to make his way. It was a basic and expanding industry and the chances were there.

Many areas of work were not open to him.  The Incorporations of the burghs limited admissions to a number of key trades and you had to be either family or close to family to enter them.  It was why so many Scots moved on to other places and other work in that period and with such ambition.

Banking was one and in the vigorous, if erratic, expansion of the late 18th Century financial sector in the City of London, Scots bankers, some from Ayrshire, were well to the fore in imaginative schemes and risk taking.  The idea of Burns the banker is a little hard to take but it might have been.

The reason this is intriguing is that one of my forebears was in Irvine at the same time as Burns, close in age and married an Irvine girl.  Some of their children were born in Ayr and the others in Irvine and a grandson moved to Liverpool.

Could Burns have become a Scouser in his time?  Perhaps it is better that Mrs. Peacock knocked over the candle.