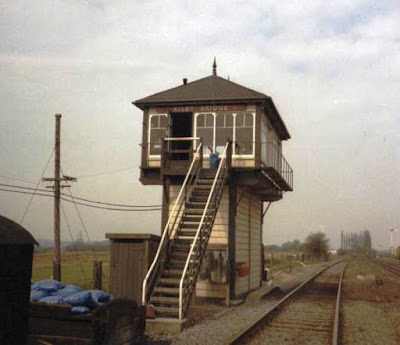 We have a new device.  It is not very large, oblong in shape and is called a tablet, although it is impossible to swallow being an electrical item a few inches by another few inches.

There was a time when the picture above represented the peak of complex communication systems.  It required shifts of men and a great deal of maintenance and ongoing work.  It is a railway signal box that I passed many times.

But this new little box it seems has the communications power of the whole UK railway system of the past.  Indeed it has more power and capability that the control systems of the flights to the moon so long ago.  So what am I to do with it?

I know that many people play complicated games, but that does not appeal, conquering distant galaxies and putting their creatures to the laser bolts is common stuff now.  Been there and done that in other ways.

But of many of things I like to do, instead of trailing about going hither and thither and flogging my was through indexes and catalogues and spending a great deal of time in turning pages I can just find, screen and whack through between the cups of tea, meals and football matches.

The device is not some secret that is allowed to a chosen few.  In fact we are late to this one, being well behind the mass.  Now almost all can have this power and knowledge if they care to use it.

Power to the people, but will they realise what power they now have and will they have the nous to make effective use of it not just in ordinary lives but in the economy and politics?

Possibly not, it may have come too late because the limited power of decades past gave people who were greedy and grasping the wealth and authority to dictate our futures.

Must go, need to check out the TV listings on the thing.