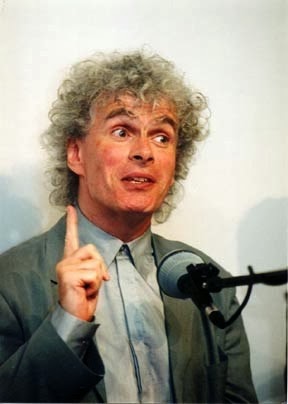 Having never been awarded an honour, or indeed a medal with the prizes of life being a few competition entries that earned a modest item or more often a discount on purchase, I can only fall prey to the sin of envy.

Sometimes it is easier to push aside that sin than others and today's news that Sir Simon Rattle now has the Order of Merit is one.  We have been at a number of concerts he has conducted and it has always been a delight.

The one time we did have contact was a summer afternoon when some of us were lolling about on the steps behind the Royal Albert Hall early in the queue for the Arena in the evening BBC Prom.  Rattle, due to conduct, came along and as some did on their way in stopped for chat.

In the course of this he told us with a big smile, "Of course, you Prommers are all mad!"  Only to be advised by one with a strong Scouser accent, "Well it takes one to know one!" referring to Rattle's own time as a Prommer when young and as someone of Liverpool birth.

He was asked if the concert was going to be good and cheerfully told us if it wasn't he would be soon back in The Arena and as mad as we were.

The concert was a performance of the Mahler 2nd Symphony, "The Resurrection" and was in a class of its own.  He has given us a few good memories.  It is good that he now joins Sir Edward Elgar as a musician who earned the Order of Merit.


There is one of those coincidences.  Rattle's mother is a Greening and so was Elgar's.  Might they both be from that part of the Cotswold and Malvern's country that was also that of the Britten's?
Posted by Demetrius at 14:30