Defence Of The Realm 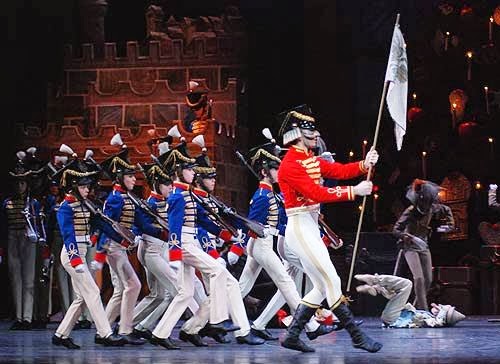 In a strange juxtaposition, General Nick Houghton has warned about the real implications of the cuts in defence and manpower and where it is leading just as the ballet "Nutcracker" opens at Covent Garden with the Royal Ballet.

In Act One there is a dream sequence where a toy town army defeats the King Rat and his followers by dint of courage, determination and Clara, the heroine, whacking the King Rat on the head with her shoe.

As someone who wore the Jerboa (Desert Rat) on his uniform when detained during Her Majesty's Pleasure (aka National Service) and who wonders if the Rat Kings of Khotan were a lost civilisation there is a necessary sympathy for the Rats.  But the ballet story line demands they have to go.

The trouble with our Defence Policy appears to be the absence of a story line that bears much connection to the actual realities of potential conflicts or the ability to field and maintain an effective force in the field for any length of time.

In both Iraq and Afghanistan we have been reliant for a great deal of support and logistics on the US forces and there have been real questions about the equipment and its design that our troops have been obliged to use.

What is not understood, certainly by modern politicians and others and worrying to a limited extent by the Ministry of Defence (MoD) is the "wastage" that arises when troops are in action or in theatre for extended lengths of time.

It was said that when the 71st Foot formed their square at Waterloo in 1815 there were only 13 men present from the time the regiment landed in Portugal in 1807.  Having been through all the muster rolls for the period the figure seems near enough correct.

Indeed the turnover of men during that period in the Army as a whole in terms of the demographics of the period were at World Wars One and Two levels.

In modern Armies the proportion of men in action to men in total is often suggested at one in seven.  In my experience and looking at how an Army functions again this seems near the mark.

To make matters worse, the Government and the MoD do not seem to understand what is the nature of the differing levels of reserve availability.

Consequently, there is a real danger that the active and potentially active part of the Army could be pushed well past the limits of their capability and effectiveness whilst the "reserve" is both insufficient or well enough organised to be used as a proper functioning force.

Just how good the much vaunted "kit" is under conditions of real extended stress and need is something of an unknown.  Even if it is better than that of the past this is not saying much.  The General has used the term "hollowed out".

What he means is that it is neither capable, sufficiently supported nor strong enough to conduct anything beyond small scale short term operations with very limited objectives.  Even then the British Army may be reliant on other forces for kit, clobber and rations.

If we are to believer some commentators the situation is worse for the Navy and nobody seems to want to talk about the RAF.l  In short while our politicians run about talking about being at the heart of, at the top table, or a great power the reality is we may not be much more than a minor or servant element.

In the meantime we have a vast Government department, huge sums of money being spent, out sourced all sorts and a stifling and ignorant bureaucracy and government in charge.

And we will be left with a toy town army good enough for theatricals and ornamenting state events but little else.