DIY For Drawing Maps Of Europe 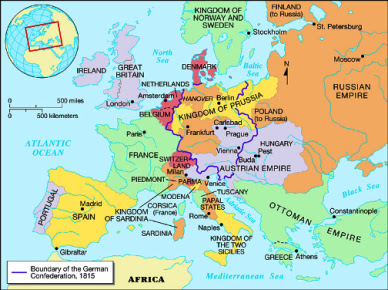 During my own lifetime the map of Europe has been knocked about a bit. As for the world many of the names I learned painfully (a whack when one was wrong) from the map on the classroom wall are no longer there. When my parents first went to school they would have been looking at a very different map, but any whacks would have been much the same.

When their grandparents went to school (if they did) places such as “Italy” and “Germany” were simple geographic guides and not existing nation states. They had yet to be formed. As for their grandparents the map of 1815 above would have seemed like a radical set of changes.

Which raises the interesting question, is “Europe”, as we understand it at present, worth bothering with? Why not just let fate takes its course for us to move onto a very different set of political entities with different structures?

In the last five hundred years there have been far too many gaggles of ambitious families, oligarchs and gangs of politicians trying to set up a mega state in their own narrow interests and failing after a disastrous, usually bloody and always very costly series of wars and conflicts.

The latest Brussels version is just one more typically arrogant, tired and corrupt way of trying to impose authority on peoples whose ways of life, beliefs and the rest are very varied and not cohesive. The reason for the present “Europe” is the usual one. It is the extraction of wealth from the many to the few.

This time round it has necessitated whole scale bribery of many of the masses. It has been done by creating debt fuelled booms together with forms of inflation that give the appearance of increasing wealth when the reality is different.

Just as the DNA of the Habsburgs began to fail to produce Emperors able enough to command and rule so the financial systems created to sustain our present Europe have begun to fail to kept the racket going. Big bangs may implode as well as explode.

We are in the position now of not being able to go back to the monetary systems we had a generation ago or before, not being able to sustain the present one without strains that are potentially impossible and without any idea of what to do in the future.

It reminds me of the car mechanic looking under the bonnet of my old Renault and shaking his head sadly. He told me the best thing to do was to sell it for spares at the local breakers yard. It was worthless as a whole and its future existence lay only in the bits that could work in a different machine.

If we are now looking at not simply a failure of the Euro but potentially the political integrity of a number of the components of our present “Europe” which way could it go?

Could Verden revert to Sweden? Could Hamburg and Bremen become City States once more? Could HM The Queen ascend the throne of Hannover in the name of women’s rights? Could Westphalia be, well, Westphalia?

There are more likely candidates for a relapse into separatist polities, Italy being the prime example but there are others. It could make a very good party game for the Christmas Market to see who is left with what. The winners get Switzerland, Monaco and Luxembourg and the losers Greece, Sicily and Ireland.

The dice have begun to roll and my money is on Iceland hoping to draw the card that says “You may have the Big Bang of your choice.”
Posted by Demetrius at 15:26