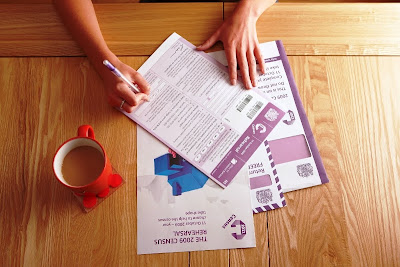 Having been reminded, several times, about the 2011 Census Return, I thought it was about time to see what many are complaining about. After three minutes careful study, my suggested use being rejected on hygiene grounds, I realised that the thing could be done on the machine.

Being inclined to do more daft things online, like so many others, I fitted it in between the analysis of the day’s cartoons and the latest forecasts of the TEOTWAWKI to lighten the mood. So now I am listed forever as a hunter-gatherer sun worshipper.

This is probably more reliable than most of the returns they will get. I suspect that the scale of bad returns this time is likely to dwarf those of previous years and those seemingly sound will be littered with errors or falsehoods. As in 2001 in some districts the size and nature of the discrepancies will be very large indeed.

Also online are the old Census returns up to 1911 which have radically reduced the time and cost of looking into the past and not only for personal family history. It means that it is possible to do other things quickly and simply.

On my travels yesterday I picked up an Evening Standard, the weekly one which also had the property pages. Flicking through them to wonder at the figures, I saw a property in Twickenham not far from a place I know and the station. A three bedroom terrace house, no garage, good condition, is priced at fifty quid short of £600,000.

It is not exactly posh by any means, under the flight path for Heathrow and with a traffic system in the area that is very congested. The local shopping is not very good and other facilities very average, unless you like attending Rugby internationals or support Harlequins.

Days before I had seen a street in Liverpool on the TV, one I knew well but this one was boarded up for demolition apart from a couple of properties occupied by aged pensioners with nowhere to go and no money. Those houses had zero value.

Thank you Lord Prescott and all your chums in the property trade for creating all those wonderful schemes for “urban regeneration” that have ruined the lives of so many. These houses were very similar in type to the one in Twickenham and arguably the local facilities were better.

So I look at another place, Jarrow, for those with an interest in Labour history. It was not difficult to find another house of the same type. This one is still in a functioning residential area, modernised and costs around £120,000, possibly a top price for that sort given the work done on it.

Then I check out the 1911 Census for those streets and look at the entries of the inhabitants. There are many people listed in that Census that I knew well. Also, unlike the bare descriptions of trade because of this I am familiar with the nuances of status and income that are implied. Some I knew will have been in their forty’s so well on in life and work.

In both Liverpool and Jarrow the families living in the streets were of the lower middling/upper working orders, essentially supervisory and higher skilled. Most will have had regular or reliable incomes. Most I suspect will have been in the Senior Classes of the then Elementary Schools and with the others had some kind of trade training or apprenticeship.

Down in Twickenham it was not the same. They had decent working class jobs and varied in type but their income level and skills would have been a little below those of the others. This would fit with the economic structure of the period. Also it suggests that the rentals may well have been lower.

Moreover, I knew these districts in the 1950’s and can recall the situation then. By that time the shift in favour of values in the South had begun to appear. But to look at the divergence now in 2011 is to ask the obvious questions about just how wide the difference is and why?

One is that the dead hand of government mingled with high finance has wrecked the centre of Liverpool. In Jarrow they have not got around to that patch but the values still reflect housing for the more middling orders. But why have the costs in Twickenham gone so very high in comparison?

What it tells me is that there is something very unstable and wrong about the UK economy and Osborne’s budget is not going to do much about it.