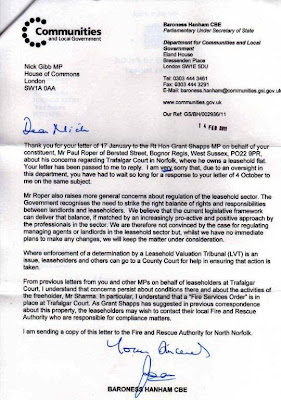 When a major issue appears to arrive from nowhere it is often the case that it was there all the time under the nose of those involved and you could not or would not want to see it or to deal with it or to admit that it could become serious.

Cameron now has a major financial blow out on his hands that is not going to go away and may become impossible to avoid. A casualty could be Baroness Hanham, CBE, at present Parliamentary Under Secretary of State in the Department for Communities and Local Government (DECLOG, I shall call it).

On 14 February 2011 (see picture above) in reply to a letter of 4 October 2010 from Nick Gibb M.P. expressing contrition for a Departmental oversight (there seem to a lot of them about in the government these days) she asserted that the “pro-active and professional and positive approach by professionals in the sector” meant that there was no need for the government to look at what was going on in the leasehold part of the property market.

By implication despite other requests for meetings from Carlex, The Campaign Against Leasehold Exploitation, they would not be necessary as clearly in they eyes of DECLOG, all was for the best in the best of all possible worlds.

Within days two of the principal financiers in that sector have been arrested by the Serious Fraud Squad, together with others, and a major property company owned by them, Peverel, has been taken into administration causing mayhem.

That is not all, the Baroness was and perhaps still is prominent in her local Conservative Party as the former leader of Kensington and Chelsea Borough Council, one of the central local parties in the whole Conservative Party organisation and very influential.

Amongst the local population are members of the same family within whom arrests have been made. Moreover it has been reported that they are contributors to Conservative Party funds in a way that allows access to the great and good.

Additionally, given the complex web of connections amongst many people arising from the financial and celebrity culture of this part of London it would be difficult to avoid contact if only at a basic social level. Quite how far that extends around the Conservative and New Labour parties can only be guessed at.

As the laws relating to privacy combined with the protection allowed to those investing in secrecy jurisdictions (see Nicholas Shaxson “Treasure Islands” and Tax Justice Network web sites) anything is and will remain a mystery. We can never know who has interests in who else and what.

Baroness Hanham must wish that she had listened to those who have serious anxieties about what is happening in the leasehold property sector and instituted a review of the state of the law and its application. Is it too late for her to do so?

Moving on, both she and others may not be aware of the implications of any disaster in parts of the leasehold sector. The current arrangements under the 2002 Leasehold Act were instituted by lawyers, of lawyers and for lawyers, one of the defining characteristics of New Labour.

One striking feature is how the appeal etc. and regulation was loaded in favour of the big companies with their legal teams against the ordinary person. This system is no longer working.

The headlong redevelopment schemes of New Labour have resulted in extensive flat developments across the country. But the rapid rise of service and other charges may well impact on sales where incomes are tighter. In many places there seem to be a good many flats unoccupied. According to some reports there are instances of them being impossible to sell.

The leasehold retirement flat sector is one where existing and potential buyers are already under serious pressure arising from the current situation. These flats, many of which were originally intended for “active retired” are now housing large numbers of the very elderly many of whom need care and support.

In the meantime, hospitals want to end bed blocking and reports of so many deaths from malnutrition and dehydration make disturbing reading. There are many care homes that are struggling; one report has a major company in trouble. The number of places in care homes has fallen significantly over the last decade for a variety of reasons.

Add to this the rising number of dementia cases for whom there are few places and in some parts of the country virtually none and what has happened is that many retirement flats have become almost partial quasi care homes serviced by a rapidly changing band of peripatetic carers.

In NHS establishments, care homes and amongst carers for a variety of reasons there are simply not the skills amongst many to deal with very real problems. Also we will soon be at the point where there are not enough people to meet the demands that will be made.

If sales of retirement flats collapse because few can afford the rapidly rising annual charges and the extras now demanded by their property service management companies then just where are all the retired who can no longer cope going to go to? Just what demands will fall on all the agencies involved?

Choose your own, there are enough of them in the history books.
Posted by Demetrius at 15:08