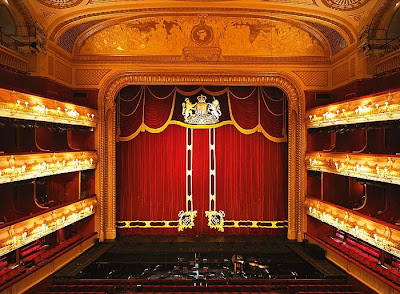 BBC4 last night put on “Anna Nicole” the new opera from Covent Garden, based on the life of the late celebrity Anne Nicole Smith. It is a story of modern times and a tragedy. It is intended to bring Opera into the 21st Century and by all accounts is quite a show.

My reservation is that life of the lady is a “soft target”. It is a pity that the Royal Opera could not be braver and tried a target nearer home and still alive. So here is a scenario for an Opera, “Cherry Ripe” which could be a hit, in more ways than one.

Overture – “The Leaving Of Liverpool”

It is outside Lime Street Station in Liverpool, in the background is the Liver Building and a Yates Wine Lodge.

Cherry appears, dressed simply as one of the Legion of Mary and carrying its banner appears walking slowly followed by others telling their rosaries. In the background is a chorus of nuns singing “We Know Where You’re Going” with watching angels praying hang from the flies.

Archbishop Beck steps forward and sings the aria, “Pray for Cherry, Everton FC and God” joined by a group of weeping priests. A group of shawl clad women wearing clogs prostrate themselves on the ground to touch the hem of her frock.

A grinning man outside Yates Wine Lodge is drinking from a pint glass. Cherry sings “Oh my benighted father” gives him a ten shilling note and he goes back inside. Cherry hands her banner to a nun and enters the station alone.

Houghton Street, London. A large dirty grey building with filthy windows. There are two letters above the door L and S, a third one has fallen off and painted in its place is “D”.

A large group of young men and women are sitting on the pavement and in the road holding banners with slogans of the period. They sing a rousing chorus of “Tories Out Out Out”. Cherry replies with the aria “Law will find a way”. They respond with a haunting chorus of “The Law’s an Ass”.

The stage darkens and when lit again Cherie is dressed in her graduate gown and wearing a mortar board hat. Her father emerges from the student bar at the back to sing “You’ll be lucky”, she gives him a pound note and he goes back inside.

A few figures move about aimlessly waving placards with new slogans, they sing “Wilson Out Out Out.” Cherry raises her rolled degree parchment and they all sing. “’Ere we go, ‘ere we go.”

The interior of the top deck of a London Bus. Cherry is with a young man with a big mouth and big ears. It is Tony, her new friend and they are alone. He sings, “What about a quickie?” and climbs on top of her. While this is going on she sings “Oh where are my briefs?”

They separate and she pulls down her skirt. The conductor appears, sings “That will be two to the terminus” and gives them tickets. Cherry pays. As Tony and Cherry begin to move, her father comes up the stairs. She gives him a five pound note. He sings “There’s Whiskey In The Jar”. Tony gives him the “V” sign as they leave.

Downing Street 1997. The entrance to No. 10 is flanked by a large chorus of people with police officers. The policemen sing “A Policeman’s Lot Is Not A Political One.” The chorus, who are carrying placards, respond with “We Are The Masters Now”.

Four TV news presenters sing a quartet “A Human Rights For Me”. As Tony and Cherry enter, the BBC presenter kneels weeping and sings “Anything You Say.” Tony and Cherry sing a duet “Who’s Sorry Now?” and all join in a rousing final refrain.

As Tony and Cherry enter, a large number of suited men and women talking into mobile telephones appear and stand outside No.10. They reprise the “’Ere We Go, ‘Ere We Go” of the first Act. Then they enter.

Cherry’s father appears, a police officer grabs him by the scruff of the neck. Cherry appears at the window and sings “Let Him Go, Brother” and throws down a handful of ten pound notes. In the scramble her father grabs two and runs off waving one in each hand. The chorus follow him singing “Money, money, money”.

A large room with bare blue tinged walls. They have portraits of Neville Chamberlain, Winston Churchill and Margaret Thatcher. There are three sofa’s, one facing with two at slight angles. Tony sits on one, Cherry on the other and a man with staring eyes, Big Al, is on the other moving ceaselessly and twitching.

They sing a trio, “I Feel An Election Coming On”, a woman comes on to join Cherry and they begin to do Yoga. Standing on their heads they sing “The World Turned Upside Down”. President Bush appears with aides bearing a world map. Big Al hands him a set of darts. The others hum, “A Little Bit Of What You Fancy”.

Bush throws the darts at the map, the first two times Big Al shakes his head, the third time Al looks and sings “Stranger In Paradise”. A group of Liverpool fans cross the stage bearing a banner “Don’t Nuke Iraq Nuke Manchester” singing “You’ll Never Walk Alone”. Big Al then leads a team of generals and civil servants in a dance sequence singing “Hey Diddley Dee A WMD For Me”.

All rush off the stage except for Cherry who begins to count on an abacus.

The same room, again with Cherry, Tony and Al on the sofa’s. Civil Servants, ministers, generals and advisers enter. A picture of Monet’s field of poppies is projected on the wall. They all sing “The Bells Of Hell Go Ting A Ling Ling”. John Reid tap dances across the stage and with Big Al, a general and an adviser sings “Without A Shot Being Fired.”

Cherry walks about with a placard stating “Human Rights Are Rights For Lawyers”. Then there is a general chorus of “We Are All Getting Re-Elected In The Morning” and they dance together.

The stage is bare with only a packing case in the middle with documents. Tony and Cherry appear and sing “When This Lovely Reign Is Over”. They pull out one document and a Queen Anne Country Manor is projected onto the wall behind them and then one of a large London house.

They embrace and a picture of the Pope appears, Tony kneels and an off stage chorus sings the “Ave Maria”. They return to the packing case and as their children come in one by one they are handed documents with pictures of various properties appearing. They all sing “This Old House”.

Pictures of Gaddafi and Mubarak appear, then George Bush to the music of “Strawberry Fields”. Cherry’s father comes in pushing a trolley of champagne bottles, helped by Silvio the butler accompanied by a troupe of lap dancers.

During this showers of fifty pounds notes come down and pictures of tax havens are projected behind them finishing with Monaco.

The stage clears and there is a silence. Karl Marx, Lenin, Stalin and Mao appear, look about them, and shake their heads. They sit down at a table and Marx begins to deal the cards as the curtain comes down.
Posted by Demetrius at 15:17