Who Will Vote In May? 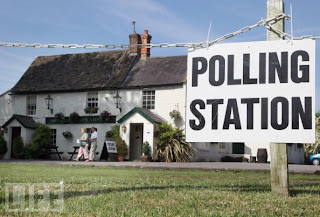 In all the debate about the impending election, especially over the state of the many and various polls, there is one matter less discussed. It is how many people might vote, that is what will the turnout be? The polls may not be a reliable guide to this since those who are involved in polls could be more likely to and it is the others beyond these figures who could be the ones that count.

Over the years the turnout has varied and to quite a degree. In 1847 for example, when the electorate might have amounted to only 10% or so of the adult population over 21 and all male, the turnout given is 53.4%. However, this was at a time of severe economic difficulties and the cost of travel to where the count was held could be significant.

The highest turnout given is in 1950 at 83.9% of the electorate at a time when far more of the population were actively engaged in and taking a real interest in both politics and current affairs. I can recall Clement Attlee speaking in a large hall to thousands who listened to every word. It was plain talk with no sound amplification and given in a down to earth undemonstrative manner.

The myth is that Attlee was a poor speaker. He wasn’t, people listened and many preferred his way as opposed to the posing and theatricalities of some of his colleagues. Also he told it as it was unlike, say Morrison, one of the shiftiest, nastiest and most evasive I have heard.

It is said that there is widespread disenchantment about our politicians for reasons we all know about. There is doubt that any party can deliver effective government for the UK, especially now that so much authority has been passed up to Brussels and down to a litter of NGO’s, Agencies and mortgaged to financial interests.

The elderly make continue to vote, more or less, although some of their postal votes may not be for the candidate intended. A number of adults in the middling ages may vote, if only because they have done so in the past. For the young it may be another matter. They have grown up in a world where politicians matter little, real political debate even less and force fed by the media and BBC to believe that real life revolves around an elite celebrity class.

What could happen? Let us assume, perhaps in fantasy, that the turnout goes to 50%, broken down to 19% Labour, 19% Conservative and 12% to Lib’ Dem’s and others. Given the loading of the electoral system unless the BNP hits Labour hard in its old core areas the Brown could be back with a small majority. Even if Cameron is 22 or 23% with Labour lower if the Lib’ Dem’s do a 1974 then he will be back and not as a positive vote but because people are beyond caring about politics.

On Monday 6 July last in a post on “Elections, Summits and Spin” I recalled how Harold Macmillan managed to turn round a government seemed destined to collapse in February 1957 to a major win in October 1959. In that election, Labour blew its chances as much as Macmillan earned his. This time round Brown could be back with either a working majority or leading an alliance with others. Do not forget that the BNP is a socialist party.

In 1959 I was at the count in my local town wondering how Macmillan had done it. This time I think I will just go to bed and maybe go online to see the results after I have looked at the cartoons, the earthquakes and the archaeology listings at around lunchtime.
Posted by Demetrius at 17:32