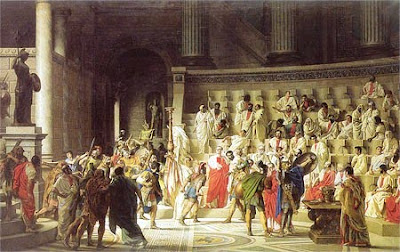 The Labour Party is close to the bottom of the barrel. With fifty to sixty days to go before a general election the latest whizz bang notion is , wait for it, wait for it, Jack Straw to announce the reform of The Lords for the umpteenth time on The Ides of March. This time round there will no longer be Lords, so we can abandon all those personal fantasies we might have had. We will have a Senate. What, you may well ask?

On Wednesday 10 June 2009 last I posted on “The End Of The Peerage Show” and really do not need to add much to that except to reiterate that before reforming The Lords we should at least have some idea of what it is intended to do. Moreover, if it is to be elected then by what means and on what basis will it differ critically from the House of Commons? Once The Lords was called the Tory Party at prayer because of the political and religious background of most of its members; so what is any new Senate intended to be? The Labour Party at the trough?

The USA has a Senate and this numbers rather less than the proposed UK one. Also it has key and central constitutional functions. The UK one will have nearly three times more members and probably no such authority. It is unlikely to match other second chambers where they exist around the world unless somehow Labour now intends to transform the UK into a Federal State. But the EU is becoming a Federal State so how is a Federal State within a Federal State, both flawed in key respects going to work?

The answer is probably the same as the one that can be applied to virtually all of the reforms, reorganisations, initiatives, projects, modernisations, rationalisations, devolutions and goodness knows what of the last thirteen years. It will be one almighty, costly and damaging mess. It will add to the confusion, uncertainty, contradictions, complexity and opaqueness of our administration. It will be very expensive and a useless addition to the machinery of government.

The notion of Senates for the most part comes from the example of Ancient Rome and the history of that body is not entirely a happy one. On that note Jack Straw in his relation to Gordon Brown reminds me of Servilius Casca and Julius Caesar.

What might have Casca said not long before he struck with his dagger? “You’re doing a great job Caesar, we’re right behind you!”
Posted by Demetrius at 15:21