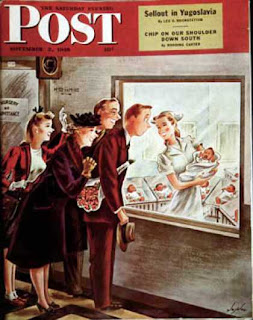 For those who may have felt that I was being a tad cynical when I suggested last Thursday, 4th March re Gordon’s Guts, that doctors were too ready to cry “IBS” when asked about bother in the belly this is the story to cap it all, from the Daily Mail of today.

“A hairdresser gave birth to a baby girl - just three hours after being told she was pregnant by doctors who initially diagnosed her with Irritable Bowel Syndrome. Belinda Waite, 21, had been to her local hospital several times during the past nine months and was told she had a severe case of IBS and gout.

In fact she was pregnant with a healthy baby girl who arrived a month ago.
Not realising she was expecting a baby, Miss Waite didn't take life easy during her pregnancy. She said: ‘I went on rollercoasters at Alton Towers, on water slides in Spain. I probably ate all the wrong foods - and was knocked down by a car.

‘Luckily I do not smoke and I stopped drinking alcohol as it made me feel sick.’
Miss Waite, known as Billy, from Bampton, Devon, said: ‘You read about these stories in magazines but you never think they happen to real people and I certainly never thought it would happen to me.’

Billy was staying with her partner Wayne Boyles, 28, when she unexpectedly went into labour. Their baby daughter Louise Boyles, who was born at home weighing 8lb 14oz, was delivered by her grandmother, Sylvia Boyles. Miss Waite said: ‘It was obviously a huge shock for us all but you have to get on with these things and we are really enjoying it.’

She said she had not felt well for some months before the surprise birth.
‘I did feel like something was moving inside me as the months went on. But I never considered I was pregnant and it doesn't seem to have crossed the doctors' minds.’
She went to her local hospital in Tiverton and doctors said it was likely to be IBS.

On Christmas Day she was taken to hospital again after her hands and feet swelled up and doctors assured her she was suffering from gout or an allergy.
On February 6th - the night before Louise was born – Miss Waite again went to hospital with pains throughout her body.

At 10pm doctors confirmed finally she was pregnant – and had been for nine months. Louise arrived four and a half hours later at 2.30am. Miss Waite said: ‘I was really shocked. I don't think Wayne could believe it was happening.

We hardly had time to think about it. No one believed us when we told them we suddenly had a child.’ A spokesman for NHS Devon said: 'We are looking into the matter. In the meantime we would like to congratulate Ms Waite on the birth of a healthy baby girl.'”

I can only add my best wishes to Louise, Belinda, Sylvia and Wayne and pour a toast to their future.
Posted by Demetrius at 17:12