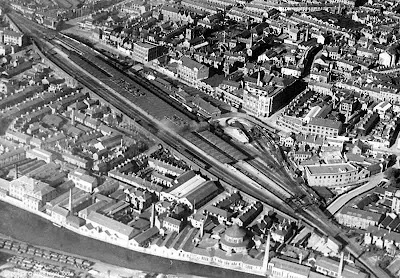 This weekend we took the train to London and tried out the new HST service (High Speed Trains) on South Eastern Railways. It did not save us any time at all going in to London because to travel from the nearest HST station meant taking longer than the time advantage over a routine train journey from my local station. Returning did save a few minutes because we just scraped onto the train seconds before it pulled out.

There was more leg room, the air conditioning was vastly superior, the seats were better and it was much less noisy and bumpy. Sadly, for much of the trip there was not much of a view, it was more like an unusually well appointed London Tube that surfaces occasionally to present a vision of the back side of the local economy.

One reason this option made sense, despite the extra cost, was that our local services have been cut by 30% to provide the staff and financial resources for the HST. So the train service we would have used previously no longer exists and the other options have also suffered. However the HST cost now means a day out in London entails paying fares three times higher than a decade ago. Necessarily, this means that we have reduced our trips substantially.

The introduction of the HST meant some works at St. Pancras but is routed along the existing Eurostar lines so the actual cost was the introduction of a modest number of new train sets, foreign made of course. The number of extra staff required is minimal being covered by cuts in services elsewhere, a personal disaster for very many commuters and others needing specialist medical treatments in London.

South Eastern Railways receives a hefty subsidy so that means money has been directed into HST rather than other basic services. The ageing Networker stock that clatters up and down our local line and breaks done frequently is a penance against the pleasure of going out. That the new HST manages to serve the Labour held parts of the county whilst the other parts suffer the losses is just part of the great game.

I can see why so many people who do not have to pay their own fares, by and large, have such a liking for the idea of High Speed Trains, especially if the capital costs of construction and general works are to be met by taxpayers’ money either now or into the distant future. Quite where the notion of “cheap fares” comes from is a complete mystery.

They can be cheap only if vast subsidies are paid out on a permanent basis, and/or the capital costs written off, or the service has an added function that attracts good revenues, as did the railway companies of old that carried the mails, the parcels, lots of freight and the members of the armed forces.

To see both of the larger political parties making great promises about HST services to the North and Scotland can mean only one thing and that is that the London and Edinburgh Cronygarchy like the idea of using taxpayer money for their own benefit. Especially if it is a massive prestige project that will look pretty, be allegedly modern and ecological and have their minions in the media drooling with hyperbole.

What trains and services the rest of us will be left with is another question. The signs are far from good if swingeing cuts in public expenditure are in view. Your HST is my Ghost Train.

What did give me a jolt was that when the HST pulled into the newly built Ebbsfleet Station although in modern form it was eerily like the layout of the old Great Central Station of my youth in the 1950’s, one of the few places where I was usefully employed. The photograph above of an old GCR Station gives the shape of it and what was lost.

When I worked on the Great Central line, George the Foreman of the Parcels Office and Charlie, a former driver stood down to station staff when his eyesight worsened, told me that when the line opened the intention was for it to be a state of the art fast line taking expresses not just to London but to Dover and through a Channel Tunnel. When they had joined as boys before the First World War they had hoped to see trains to Paris, Rome and Berlin running through. The military scotched the tunnel idea and the busts of the City, which in any case preferred investing in the American bust and boom markets, did for the rest.

In the railways rationalisation of 1923, a hasty botched job of trying save companies broken by the First War emergencies by merging them with marginally sound others, the GCR was handed over to the LNER. The consequence was that like the Great Eastern and other lines they were starved of resources that were concentrated on the East Coast Main Line and their revenue earning freight workings used as a cash cow for the prestige trains.

The passenger services never recovered under British Rail and in the 1960’s financial crisis the Labour government took the view that any idea of competitive high speed running on the only line actually built for it, to continental loading gauge standards, never mind connections to Europe, were far too costly to think about. Also the freight traffic was declining rapidly. The GCR line was closed and only parts remain visible.

And now the two major parties want to rebuild an equivalent; regardless of cost.