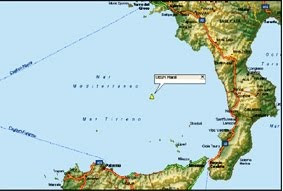 The news that Berlusconi has managed to succeed with an improved position after the elections in Italy will be heartening for Brown and Blair. The former because he is desperate to hang on to power; the latter because like his Italian friend he might face awkward legal situations.


There are also the familiar incentives of money and taking care of one’s fellow Cronygarchs. That Berlusconi managed it on reduced turnout would fit the bill for the pair of them.


Nevertheless the ever cheerful Armageddon dot org web site featured a story going the rounds of the pessimists and tremblers about a threat to Italy, a vulnerable geophysical zone. This is one of the less known volcanoes because it is under the sea and has been quiet during our brief period of recorded history.


Europe's largest undersea volcano could disintegrate and unleash a tsunami that would engulf southern Italy "at any time", a prominent vulcanologist warned in an interview published Monday. The Marsili volcano, which is bursting with magma, has "fragile walls" that could collapse, Enzo Boschi told the leading daily Corriere della Sera.


"It could even happen tomorrow," said Boschi, president of the National Institute of Geophysics and Volcanology (INGV). "Our latest research shows that the volcano is not structurally solid, its walls are fragile, the magma chamber is of sizeable dimensions," he said. "All that tells us that the volcano is active and could begin erupting at any time."


The event would result in "a strong tsunami that could strike the coasts of Campania, Calabria and Sicily," Boschi said. The undersea Marsili, 3,000 meters (9,800 feet) tall and located some 150 kilometres (90 miles) southwest of Naples, has not erupted since the start of recorded history. It is 70 kilometres long and 30 kilometres wide, and its crater is some 450 metres below the surface of the Tyrrhenian Sea.


"A rupture of the walls would let loose millions of cubic metres of material capable of generating a very powerful wave," Boschi said. "While the indications that have been collected are precise, it is impossible to make predictions. The risk is real but hard to evaluate."


It’s good to have something to look forward to for a change. And there is Iceland on the go as well.