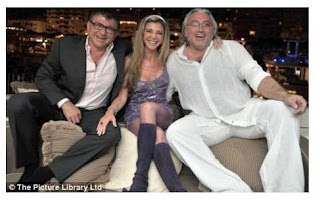 “Private Eye” Number 1258 landed on the mat with a quiet flop. It is not what it used to be in the days long ago when it hounded Poulson and the like and is much more predictable and could we say “dated”? Here and there, apart from the media introversions, however there are often nuggets of interesting information that remind us of the reality of our rulers.

This week there were a couple of things that did catch my eye. One is a comment on Ann Widdecombe, soon to retire MP for Maidstone and The Weald, rather holier than thou these days having kept clear of the tawdriness of the expenses scandals. PE mentions her comment of “entirely inappropriate etc. etc.” regarding the candidature of Anna Arrowsmith, a Lib Dem, for Gravesham, the lady having been in the past a producer of films allegedly pornographic in content.

PE points out on Page 8 that Widdecombe currently banks £4583 a month from the Daily Express whose owner Richard Desmond is also owner of a number of TV channels dealing with the most basic instincts relating to personal conduct.

There is a piquancy in this item in that the editor of PE, Ian Hislop resides a few miles from Maidstone in the area of the Weald and not far at all from where Widdecombe used to live. I understand she has lately moved to Dartmoor which ought to tell us something. But one of my first school friends also moved to Dartmoor a long time ago. The local Assizes provided him with free board and lodging for a number of years.

On Page 9, however, there is something that set the alarm bells off in a piece on some of the interesting people who have been backing David Cameron. As a voter who cannot wait to see the back of the present government and all those who are linked to it the news was discouraging. For those who fear that a change of party will simply mean a change in the front men serving the current Cronygarchy there was one item there that might confirm the worst suspicions.

The item referred to the divorce of Vivian Imerman from Lisa Tchenquiz and its fall out one way or another. It was said that he was locked out of the offices he shared with Lisa’s brothers, Vincent and Robert Tchenquiz. These have been very rich people indeed in the recent past although at present there are questions over the scale and nature of their losses.

Lisa is said to have donated £100,000 to the Tories, more than enough for her to have the status of membership of their “Leaders Group” with lunches, dinners and receptions. Robert is said to have given £11,200 in 2008. What other support or donations may have been made is not known. Vincent’s contributions are not mentioned but there have been indications in the past that his money has helped some charitable interests of Labour Party leading lights.

Interesting that one side of the family appears to back the Tories and the other to back Labour. Given the existence of the Tchenquiz Family Trust that includes all three and supports the family and maintains their interests it is really quite sensible if such an active family and business group keeps its political options open. Perhaps these days they need all the political friends they can find.

At one time the brothers centred their joint interests in Rotch PLC that channelled their profits etc. into whatever offshore holdings they possessed. Perhaps Monaco was the most likely location where they maintained ocean going yachts, supporting tenders, a vintage car museum and properties on the Cote d’Azur. Then a few years ago these were divided for operational purposes into R20, run by Robert, a major investment and equity group and Consensus, run by Vincent, concentrating on a variety of property interests.

They have both run into bother recently. Robert, involved with RBS and Kaupthing of Iceland has taken major losses and is being chased by creditors. Vincent, perhaps very ill served by his subordinates, has triggered an organised national revolt amongst his customers. The man in charge of Consensus was perhaps unwise to call his critics, mostly former professional men, “dribbling geriatrics”.

Unluckily as this is the style of management the company seems to have adopted relative to its customers it is not really surprising that some with long memories, entirely wrongly I am sure and altogether misplaced, are now making comparisons with the sort of property investors of the past that Old Labour saw as enemies of the people. But then Old Labour was based on its membership monies and not on the handouts of the rich and well connected.

The real question though is how stable and secure their finances are and where they are getting their support from. RBS and allied financial entities are the obvious ones, a bank now owned and propped up by the taxpayer. Vincent has been a player on the funds markets, and with highly leveraged investments. Their office in Mayfair was conveniently located within walking distance of the AIG subsidiary on Curzon Street alleged to have provided the trigger for the Great Crash we have just had.

These gentlemen have been very big in property and in dealing. Given the frantic need of the government to try to prop up the property markets and the remnants of the financial sector is the Tchenquiz brothers network of operations one of those that is “too big to fail” and amongst those who are really those being supported through the nationalised banks by political interests whose own financial investments and personal interests are critically involved?

We know the tune that Brown and Darling are trying to play, but what tune will David Cameron be playing? And just who will be paying?
Posted by Demetrius at 16:58