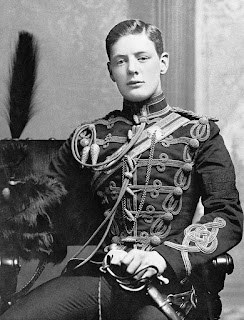 A media story has been about the racism of Winston Churchill, 1874 to1965, and that he should be put in the dustbin of history. He began as a cavalry officer in the 4th Hussars in 1895 and at the Battle of Omdurman in 1898 took part with the 21st Lancers in a real battle for supremacy against a major Islamic army. Had Britain lost the Middle East may have been lost and a different world emerge.

My only connection with him was that having played rugby against the 4th Hussars, when he was Honorary Colonel, I was told in the mess that the result would be on his desk as soon as possible, he liked to keep in touch. It had been, let us say, an untidy game. Was my career and future doomed, I wondered?

He liked to mark Empire Day which was introduced in 1902 by Lord Salisbury, Tory Prime Minister and one of the Cecil family. It had to be celebrated by schools for a long while after. My Elementary School Head was ticked off for ignoring it and concentrating on divinity and God first and ordered to put on a good show or else by the local Inspector.

This meant a senior girl being a Britannia flanked by the big boys of the senior class with most of the pupils blacked up to be the grateful recipients of British rule in one place or another. We were not sure where, the school being short of maps. The Inspector was delighted. My parents were not and there was an almighty row.

Stage makeup was expensive, but the caretaker had come up with a mix of coal dust and greases. Effective, but not washable. Best shirts were spoiled and the skin stayed black for some time, causing our school derision from others. Empire Day continued but without the stage effects. We stayed white.

In a sense therefore, everyone alive at the time and who attended a school, state or private, had the Empire thing and be by definition a party to White Supremacy. Whatever Churchill may or may not have thought, when he went into politics he had to preach the virtues of Empire and British Rule to win his majority.

What few 21st Century witch hunters do not realise, is that it had many faces and was rooted in the science and history theories of the period and on the Left as well as the Right. One field was the Eugenicists and their ideas of race. A key figure was Sir Alexander Carr-Saunders who retired as Director of LSE in 1957 not long after the Suez Crisis told us that the Great Game was lost. His successor was Sir Sydney Caine who was expert in the field of demographic statistics and population size.

Lord Beveridge was one of them, another LSE man and a Son Of The Raj, whose famous Report on which the Welfare State was based owed a great deal to the idea of stratified descent and class. The upper class had to take care of the lesser lower classes or else. Attlee had been a tutor at LSE and also derived his ideas from them.

The Eugenics School had gone into retreat by the 1960's and the march of science, DNA, the study of the long past and demographics tells us it is all a lot more complicated than we thought and there is a long way to go and a lot of research to be done.

As for Churchill, his mother was American, one of the wealthy Jerome family who brought much needed loot to the high spend Duke of Marlborough, his father, and whose money helped in launching his career not least his claim to American antecedents. This came in very useful in World War 2.

There is no documentary evidence only a family story that one of the Jerome ancestors was an Iroquois warrior, that is First Nation. But the Jerome's were happy with it as a claimed part of their American heritage and so was Churchill.

One way or another until well into the 20th Century the concept of supremacy was embedded in most political and social thinking. It is ironic to pick on Churchill who was one of the rare people claiming descent from a subject population.