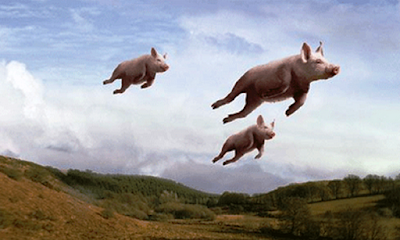 There are a lot of theories to explain what is and it is time to develop new thinking on issues of political economy. In the 1950’s the hot money was on Keynes ideas versus Marxism-Leninism.

Keynsian ideas were convincing. The trouble was the real world and especially politicians.  To operate his ideas you needed to make the right decisions; however politically difficult, and at the right time. You also needed reliable statistics, and we know that politicians  hate the statistics  to be reliable or to be unwelcome.

Here is my Flying Pig theory of economic history.  It suggests that is in each generation or historical period a government has it most cherished prestige, aggressive, or politically popular ideas that it sells hard, builds its policies and structures around, and  are intended to last forever. We have had our share, one being the British Empire.

In Europe Napoleon did his best but ran out of men. In Germany the Third Reich was supposed to be good for a thousand years. There was a Holy Roman Empire, and an Ottoman Empire, all gone. More recently there used to be The American Dream.

In financial terms the UK started off in 1945 with a fixed exchange rate, based on the 1926 figures, in order to maintain its position as a world power (using American money). That failed almost within months, so the fixed rate went to a lower figure. This lasted until 1966 doing untold economic damage until we crashed out to an even lower figure.

That  held until the mid 1970’s when that Flying Pig was grounded, and in the 1980’s Mrs. Thatcher managed to persuade people that another Flying Pig, subsidising defunct 19th Century industries at the expense of everything else was no longer feasible.

Unluckily the cure with similar ideas in the United States of America, launched a flock of Flying Pigs. Among these flights of fancy in the UK, was the notion of trusting money merchants, who as non-tax paying “Non Doms” and High Net Worth Individuals with their wealth, in tax havens, linked to the UK created a huge financial services sector that was the equivalent of taking in each other's washing.

This propped up a London property market which has deformed the economy and created a national bubble, exported world wide. But the government were never in control of this. There was debt creation, churning the Gross Domestic Product figures higher and higher with government and personal debt.

To keep the employment figures respectable public expenditure was vastly expanded beyond income. Another Flying Pig is the pension entitlements of public sector workers that can only be maintained if the other Flying Pigs remain airborne.

To return to the 1950’s there were other branches of economic theory on offer.  One was a disregarded attachment to classical economics that morphed in America to monetarism. There was the Austrian school and another was corporatism, a hangover from the early communitarian and temperance movements, and another was Welfare Economics.

This was not as its name may suggest. It required a hard analysis of what exactly we were doing and what it was supposed to be for in real terms rather than money or other terms. It relied less on mathematics than a real appreciation of what was happening on the ground. But the idea of trying to establish what living in the real world involved and how to stay stable was anathema to the politicians and the media.

If you want to try  some Welfare Economics try Shopping Trolley analysis when idling your time away at the check-outs. How many of the goods in peoples trolleys do they actually ”need”, not want, not marketed, nor the rest, but need in the strictest sense of the word?

Another is the motorway test. If you want to increase economic growth simply persuade people to make lots of unnecessary journeys around motorways rather than saving, and build huge centres for them to visit that are full of useless tat for them to spend money that has been borrowed to buy it, so creating additional monetary flows in interest payments.

Such an idea would be absolutely crazy wouldn’t it?  But it is one of the Flying Pigs we have been worshiping and  the only solution the Government can think of is to try to resuscitate it, and try to catapult it airborne before the next election.