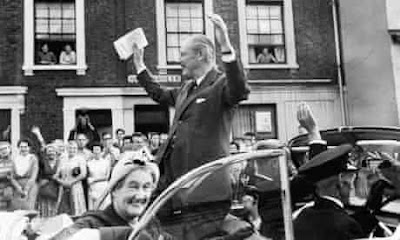 We have been here before. In January 1958 a beleaguered Government under a non-elected Prime Minister, Harold Macmillan, lost three senior ministers in a row over economic management and fiscal policy. “Supermac” brushed the major policy disagreements and resignations aside by referring to it as a “Little local difficulty”.

Despite the howling of the press, adverse bye-election and local election results, Macmillan carried on with his high spend policies of public services expansion to create employment. He ignored calls for fiscal restraint and caution. A host of learned economists were summoned to recommend that an annual rate of inflation of 3% compound would be entirely manageable.

It would lead to sustainable economic growth, maintain the value of the power, enable increased public spending, and last but not least keep the as a world economic and military power. Well, we all know what happened in the next two decades don’t we?

But do not forget that Macmillan won the election in the next year, 1959. I recall at the count I attended the astonishment and despair of the Gaitskellite Labour followers when the results were announced. It was clear that against all the odds the Conservatives had survived, and were there for another five years.

Except that Macmillan wasn't, because of the Profumo Affair and his prostate failed in 1963. But  when asked by the new President Kennedy of the (they were related by family marriages) what the main problems he faced were, answered, “Events, my dear boy, events.”

In the meantime we have a fiscal problem that will not go away, and needs difficult decisions to be taken very soon, and not after the next General Election.