The Day Of The Jackal 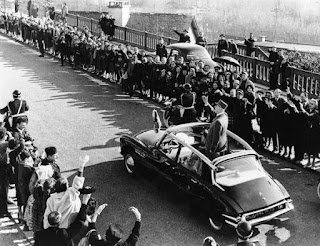 It was in the late 70's and we were taking a long straight D Road up to the ports in northern France with a large trailer bouncing around behind full of kit. Suddenly a couple of motor cycle police appeared and ordered us to pull over.

Wondering what gestures exactly the young ones had been making as we passed through the previous town I felt it best to get out and start apologising first. They were quite apologetic in return, having noticed my old divisional symbol on the rear, and asked me to wait.

Then I realised why when a cavalcade of other police motor cyclists, black Citroen DS cars and sleek vans came past. It was President Giscard D'Estaing on his way north. As they moved off the police beckoned me to follow.

So not far behind we belted along roads that had been cleared.  I realised that my heap and swinging trailer made a good road block to prevent anything else passing. Eventually we swung off at our turn getting a cheery wave from one of the police.

Watching the film "The Day Of The Jackal" brought back memories of time and places. The border point at Ventimiglia was as bad on film as in real life. How was it that when we were supposed to be so much poorer so many people looked a lot smarter and healthier?

The film is an example of how good film making could be especially when free of the compulsory clatter, big noise, crashing, in your face, blindingly obvious and posturing of so many productions both on film and on stage. In some ways it is a piece of history.

It was a story and fiction but the film has the feel of some reality and ordinary life of the time and deals with it straight and without exaggeration. It was a different world inhabited by different people in their behaviour, reactions and what they did and why.

The parts that did jerk the memory was the banging away on typewriters and communications. It looks almost primitive and closer to the Middle Ages compared to what is available now.

Of course, if our leaders get their energy and some other policies wrong in the next decade, then the film may be more like an advanced civilisation that had peaked.