Stalin Has Not Gone Away 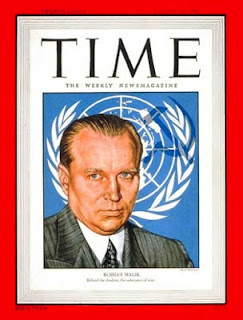 The updated post below was in October 2015 and given the present is a backdrop to some of what might be going on. Old habits die hard.

As the Labour Party changes of people in various posts there has been comment that some, notably Seamus Milne, one of our elitist Left Wing, are said to be Stalinist.

Yakov Malik, middle name Alexandrovich, see above, is one of the forgotten men of the Cold War period. There is a brief article on him in Wikipedia that says little considering that he was a major figure in his time.

This clip from the Herald Tribune of 1973 paints the picture in a way. But some of us remember and from the 1950's when he served as Ambassador to the UK, 1953 to 1960, succeeding Andrei Gromyko. This was the period of the spies Burgess and Maclean and Philby was keeping his head down.

When in London he did not often emerge from his lair carrying a club to beat the capitalists with and when he did he picked his venues. Preferably with an audience receptive to his world views and perceptions of international affairs.

The occasion was at the London School of Economics with a beaming Ralph Miliband of LSE at his right hand and Eric Hobsbawn of Kings College across the road to his left. Harry Pollitt, Leader of the then Communist Party was on the front row with Jack Dash, the London dockers leader. I was at the back in the low company of disbelievers.

As a hood spotter, the Soviet's and more recently Russians, were easy to mark. I enjoyed giving them a beaming smile murmuring "Tovarich" as I passed if only to give them a fit of the vapours. At the LSE they were jumpy, somebody might ask an awkward question but they had to keep their hands to themselves.

As Malik's talk went on, at first it we thought it was simply a rehash of the old story, but then he moved onto other matters, what was he going to come up with? Macmillan, only recently Prime  Minister seemed to be losing ground against Hugh Gaitskell.

The CND were going strong and the end of Empire was in sight. In general there was a feeling to put the past behind us and to try to enjoy the present. We now had an NHS and a welfare state and were prepared to settle for what we had, but there were many who looked East and thought they saw the future.

In the USA, Eisenhower was well into his second term and the jockeying for succession had begun. There were the Civil Rights troubles, strident anti-communism and an economy in rapid change.  The Americans seemed to be in too many minds about too many matters.

Malik then made his statement. The USSR he said would overtake the USA in terms of economic production during the coming decade and would become the indisputable leader of world trade and finance. It was already the leader in space and science. It would go on to lead in manufacturing, technology, unity and culture. The USA would be relegated to an also ran declining nation.

This was music to the ears of most of his audience. They were looking to the East for the future. Stalin had gone and was seen as a world hero in the defeat of Germany. The truth about his regime was yet to emerge. The new Soviet Union would be the model for the world and they wanted Britain to be part of it.

Malik, or his hoods, did not have to worry about the questions. The ones who were to be answered had already been picked to ensure a carefully structured and convincing session. Miliband, so anxious to please, made the mistake of pointing to the person before they put their hands up.

I was not eligible for the reception that followed in the Senior Common Room, but before I left, I did recommend to the Soviet hoods that if they wanted to see a really good farce, to try the Whitehall Theatre. Running at the time was the play "Simple Spymen", see Wikipedia.

It seems strange that after so long in the new Labour set up the farce goes on.