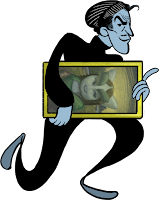 During my working life it helped to know what I was doing. Some jobs were not difficult. When the train came in you went to the parcels van and took items out and put them on a trolley. Or when the foreman said dig a hole there that is what you did.

In the many other jobs were times when you realised that you were not doing what should be done, had forgotten what why and all those clamouring people had only managed to confuse and disturb everything. Perhaps you made a decision and hoped it worked; but often you tried to pass this difficulty to someone else, anyone else.

One way of putting it was that you had "lost the picture". Where it comes from I do not know, a guess says military because I had experience of standing with generals by a large map realising that The Plan had failed, the operation orders were a nonsense and the troops had gone missing. You could only hope that The Cameronians had not found Hamburg and its delights or the Mobile Laundry had not invaded East Germany.

When much later it was politicians to be dealt with as well as other managers of various kinds it was often hard to get them to make a decision, no matter how urgent or necessary because someone always had an objection, or the choices were hard, or because it had complications and they did not like or understand them. Worst of all were those who wanted their own way, come what may and for whom compromise or analysis were demons of the deep.

In the 21st Century we think that governments, large organisations and entities and such ought to know all about what they are doing given the extent and nature of modern communications and the vast content now available at a click. For anyone in some senior position to admit to being unsure or find coming to a decision difficult is almost a cardinal sin that will have you despised and disliked, at least a move up from being burned at a stake even if being sneered at on TV is now a personal disaster.

The urge to have governments and rulers who knew what they were doing was one of the mainsprings of democracy and demands for representative government. The ignorance of rulers as so great it should be replaced by the wider and fuller knowledge and awareness of the people as a whole who would decide who would represent them in positions of authority. The people would listen to rational thinking, seek knowledge and then want to make the best decision possible for all.

It has led to the great divide between those who value the individual and those the mass. On the one side there are the planners and believers in state run lives, nationalisation and decision by politics and government. On the other are those believing in free markets, individual decisions and wide freedoms of belief and action.

We have examples of both but most places are in between or rather betwixt and between and unclear what their information is telling them, what it means etc. etc. etc. But they have to put on a show claiming that all is within their grasp and what people have to do is to agree and show due respect, or if priced cough up the necessary.

What is happening today is that the more extensive and powerful media has merged with politics rather than being close or overlapping entities and can address not just large groups but the indiviual in a way not possible ever before. So who leads who?

See The Bible, Mathew 15-14, or Wikipedia, the blind leading the blind.