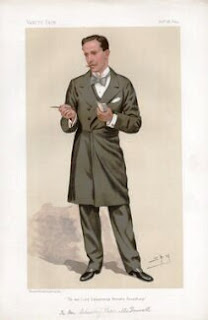 In the debate on the causes of WWI of 1914 to 1918 one suggestion is that the Kaiser did not think that Britain would enter the war in Europe, despite treaty obligations, because the situation in Ireland at the time made it impossible.

Whether this is right or wrong is another matter but at present the Brexit situation is said to involve matters in Northern Ireland which could impact on decisions and votes.

Wikiepedia has a summary of the biography of Schomberg Kerr McDonnell, 1861-1915 which reminds us that Northern Ireland was once central to the Conservative Party thinking rather than being a far flung outpost of the old United Kingdom.

He had been Principal Private Secretary to Lord Salisbury when Prime Minister, fought with distinction in The Boer War and died of wounds at Ypres in November 1915 serving with The Cameron Highlanders.

There is the uneasy suspicion that the present Conservative Government would prefer us to forget about him and his comrades in order to agree to the German terms of Brexit.