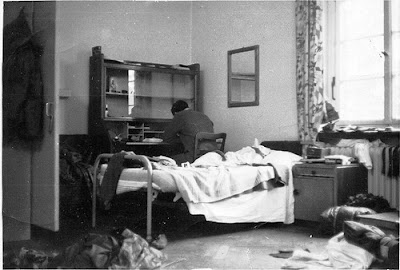 The "Telegraph" today in the Opinion section has a piece either of lazy journalism or an understaffed team under pressure to get out stuff their subscribers will read and feel the money is worth it.

It is that three legged short winded nag "National Service" which we thought had long since gone to the knackers yard of Defence and other policy. The idea is to bring it back. The most incredible thing about it is the blissful assumption that it will allow personality changes to the young to turn them into "good" citizens.

It is failed to do that with my generation, many of whom learned the finer arts of skiving, boozing to excess, disrespect of managers and bosses and demanding more and more of anything they wanted. Some became the undeserving poor and many became trade union activists.

In 1956 it was former servicemen who were rioting in Parliament Square against the Suez Invasion. This may seem a little extreme, but a number finished up racketing in pubs and then went on to work over clip joints in Soho, to the anguish of the criminal owners and the senior police officers they paid for protection money.

As some "old" soldiers had seen active service and been in the more dangerous locations of the retreat from Empire, never mind those who had been trained to tackle the Soviets in Europe, it all got very untidy in that period. Thirty years later it was the same men leading the charge for early retirement claiming that having done NS they had done their bit.

If you look at the world today and all the problems, a crew of stroppy, skiving, unwilling awkward teenagers are the last people you want to either give weapons for Queen and Country or expect to fill in for the social services vacancies. The only way they can really changed is in decent jobs, fair pay and an environment of mature and balanced effort.

But then, the working spaces in our media sources are nothing like that.