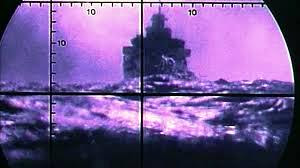 The Sky Atlantic channel is to screen a sequel series of the German war film "Das Boot" from the 1980's which some will remember. That was about a German submarine U Boat crew and the year 1941 when the result of World War 2 depended on whether Britain could maintain shipping connections with Canada and the USA.

Two of my uncles at the time took a bath in the Atlantic, and were lucky to survive. Another was Royal Navy serving in a destroyer, the hunter the U Boat captains feared. I recall the convoys in the Mersey and the women asking which ships had arrived and which had been lost.

The original series was gripping and attempted to convey what happened at that time, albeit with the need to keep the personal stories going and have a great deal of action. In reality a great deal of time in this war was spent watching and waiting for the crucial moments.

That it was brought to Britain in the early 1980's and gave, up to a point, the German view of things was in a way all part and parcel of the media drive to turn us into good Europeans. We should realise that the Germans were not so bad after all, just doing their job, and we were just another country fighting our own war.

The question of whether West Germany intended to make itself the industrial and financial centre and hence political dominance of the Common Market as it then was wrong headed. Because of its economic power and new stability, inevitably Germany would be a leader, but nothing to worry about, pass along the gravy train please.

The sequel, among the cast has an August Wittgenstein. There is something a little surreal about having an actor of that name. Ludwig Wittgenstein was a notable German philosopher of the first half of the 20th Century who went in for the analysis of logic and the meaning of languages.

The original "Das Boot" would have had an audience of whom most were familiar with World War 2 and the ways of life at that time and the ideas and habits of those people. What will the sequel be obliged to give us to inform and entertain new generations the great majority of whom see the 1940's as ancient history?

Will it be made to meet the requirements of our PC world and tell us what we ought to think? Will we have a crew, not of hard men fighting a hard war in the comradeship of a warship at sea?

Or will it be an LGBT group swinging in their hammocks?