A Day Of Days 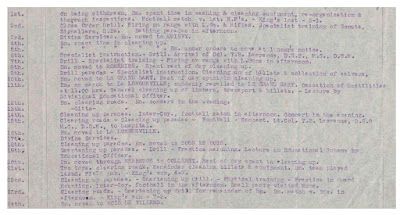 The hundredth anniversary of The Armistice has had a great deal of attention in the last few days. But the picture above is a small item of real history from the month of November 1918.

It is the page from the War Diary of the 13th Battalion of the Kings Liverpool Regiment, who then were in the 9th Brigade of the 3rd Division. 1918 was a busy year.

From the dairy it seems to have been quiet but in September and the earlier months they had fought many battles and lost hundreds of men, probably most.

They had won medals but as their Division, the 3rd, was equal and better than the German storm troopers they were well deserved. Below is the listing of actions in which they fought that year, taken from the web site The Long Long Trail, which is of immense value and interest.

The Diary gives a picture of the reality of life for the troops at that time, in this case behind the lines. On the day, the battalion were on the march, probably to the Front Line, but then stopped in their tracks. Had Armistice Day been later in the week it is possible that many of them would not have survived.

Another reality largely omitted from much of the media is that a major reason for driving the governments to the negotiating table was that they were running out of men.

In the Occupation force they were posted to the area of Germany known as the Hunsruck, the part featured in the German TV series "Heimat". The series, however, had French occupiers, quite different from Liverpool men. For one thing they would have spent much of their time playing football.

As their War Diaries tell us.