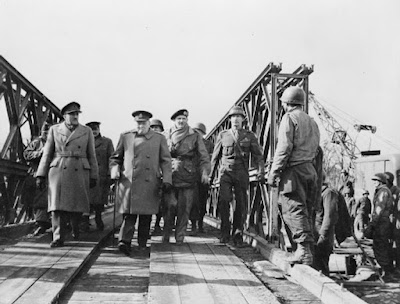 In the recent squabbling about Europe, we recall "Churchill's Vision" dating from speeches made in the immediate post war period from 1946 to 1949.  That is his ideas on the creation of a United States of Europe to become a new Great Power of the future.

This would not be any imperialist power related to the empires of the Europeans of the past, the Imperium would be Europe itself and the former nations of Europe states within it. The picture above is Churchill crossing The Rhine by Wesel in 1945 days after the British 11th Armoured Division.

Quite whether it might be a Federation or Confederation was not made entirely clear.  This confusion of thinking might have led to trouble as the USA found out in a long, nasty and damaging Civil War.  As we all argue now about the mess we are in and who was at fault, such a vision is urged on us as a beacon for the future.

No politicians speeches should be taken at face value, least of all Churchill's with it florid, orotund passages, sweeping and questionable history and chunks of media friendly prose, purple but never pink and invitations to greatness, taxpayer funded.

As Bessie Braddock understood you had to think about what wasn't being said.  Churchill had forty years of active politics at the top one way or another and knew how to play his hand. As a well read student of the past he was aware of the many complications.  Above all, the Intelligence part of World War 2 had taught him how to select and analyse material and what not to say.

It is around seventy years ago now and in the simplifications of history to make them readable to modern people the sheer complexity and scale of the problems of the 1945-1955 period are difficult enough to read about let alone to understand.  But it was not the same world as today.

In France, which had more or less finished up on the winning side, the ongoing political shambles of the Third Republic which had got it into the war was now compromising the peace and any sort of effective recovery.  Poverty was rife and life very hard for most.

Germany, now divided under Allied controlling powers was hungry and destitute and it looked as though it might take more than one generation to bring about stability and recovery.

Italy, was in much the same political confusion as France with the added strains inherited from the difficulties arising from the "Reunification" of the mid 19th Century.  The economy had collapsed and there seemed to be no way forward.

Other states were no better, as one example there was a great deal of suffering in Holland.  In the USA there was a signal lack of leadership and clear strategic thinking. Not only was there a difficult Presidential election in 1947 but too many, critically in the State Department, assumed that the end to the war meant back to business as usual.

Associated with this thinking was a reversion to the defaults of relative isolationism, concentrating on doing deals to the advantage only of the USA and regarding Britain and its Empire as the major historical enemy. Washington was slow to recognise the reality of Stalin Soviets and slower to realise that both France and Italy had major communist parties with strong chances of achieving power.

Churchill's speeches, by now  out of power, were meant as "wake up" calls to the USA as much as holding out his hope for Europe. It left the USA with the choice of letting Europe go its own way or becoming involved in its defence, the blocking of communism and helping to restore functioning economies with which it could trade.

The veiled threat was that if the USA did not realise what could happen then Britain might then take the lead on creating a new Europe that might become a real competitor to the USA in terms of business and finance across the world.  For all its posturing of democracy the USA was still effectively run by an elite related to big business and Wall Street.

What is not in the documents and not recognised or realised or even in the content of the speeches is the idea of Europe that Churchill might have had in mind.  If he discussed this it would have been quietly and with a select few of confidants.  These in turn would have understood the potential.

By 1947 Britain had lost India and more to the point under Mountbatten the withdrawal was almost complete.  Any lingering idea of "The Political" that is the highest ranks of the Indian Civil Service remaining as guides or advisers was gone.  But it was the lesson of the Raj that mattered to Churchill.

In the story of Britain in India what is astonishing is how few British people were involved in total at any time in running it.  What happened was that the most senior positions at the centre were held by the British with handfuls of key political advisers attached to the Prince's and other potentates.  For much of the 19th Century many of these were actually related to each other.

After WW2 the inner few of Churchill's personal friends and generals had mostly been in India, knew the Raj and some were in fact of the Raj.  Churchill himself had been a major figure in promoting Britain's role and purpose in India.  He had seen it as many did as "The Jewel In The Crown".

He understood the complexity and meaning of the Roman Imperium.  This was to grasp and hold the key positions at the very top and to keep the command and control in their hands.

If in a United Europe it was the British that constituted the Imperium, had been the inspiring force, had troops under its command yet delegated much to individual nations as the Raj had to the Princes etc. then Britain would not be just "at the heart of Europe" but the brain and the nervous system as well.

For a short space of time after World War 2, in Europe Britain was almost the last man standing.  Battered, bruised and broke maybe but with enough status and authority for a short time to seize the heights of power in a United Europe.