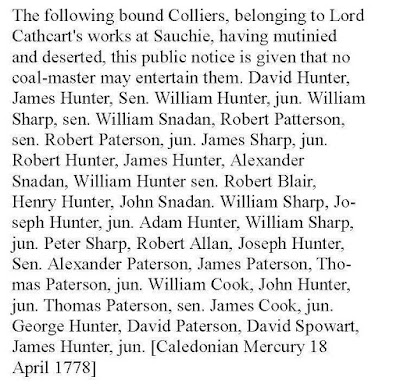 Another person offered an honour has declined it on the grounds that it is one of the Empire category and the British Empire once had many slave owning and trading colonies until the late 18th and  early 19th centuries when along with others it ended it.  This was an extension of the forms of slavery and serfdom that had existed in the Atlantic Isles in the millennia before.

The Irish and Scots might argue that these lasted in one form or another until the 19th Century when between famine and rapid economic change they began to collapse. Our new Prime Minister, Ms. May, could claim that she has family who were in a condition of slavery in this period up until 1799. She has Paterson's in her ancestry who were mine workers in Scotland, Clackmannanshire.

Under an Act of 1606 of the then  Scottish Parliament, there was a category of "bound labour" in Scotland that applied to colliers and salters. The Scots are in no doubt that this was a form of slavery under which these men and their families suffered and if you apply the test of what the conditions etc. were of those affected, I would agree.

But there are the wider issues arising from servitude, serf status and other labour conditions that for the individual at the bottom of the heap amount in effect to slavery. There is indentured labour, contract labour and the Padrone System (see Wikipedia) of employment that in theory are not slavery in that there is supposed to be a time condition or other means of ending.

But all too often these become a lifetime of serfdom of which debt bondage is all too common or the liabilities or problems of moving meaning people have no effective choice.  Indentured labour along with convicts from The Atlantic Isles ran parallel to that of slave labour in America and the Caribbean West Indies.

In England into long in the 19th Century the Acts of Settlement applied by which people could be forcibly sent to what the law specified was their home Parish.  Once there it could be the Workhouse and in those places and under the Poor Law of 1834 for those at the benches, in the fields or breaking rocks it was a form of servitude hard to escape.

It went on until late in the 19th Century and the conditions for orphans or other children became a scandal.  In particular the use of what were in theory apprenticeships was a form of forced labour beyond ordinary servitude.  Even for what appear to be ordinary workers it could be oppressive. Mill owners for example, with company housing, company shops and being local magistrates could leave a family with very little money and no choices.

Even for ostensibly free people in some villages and estates the landowners could regard the lower orders as in effect serfs, those who could not get away were trapped. For many men the only way out was to take The Kings Shilling and join the Army or to volunteer for The Navy, another form of unfree condition but for many better than staying where you were in many rural areas.

The question of military service raises other questions.  For a long period the Royal Navy used impressment to man its ships, that is forced labour for uncertain periods.  Also, men might be called for The Militia, many of who then were packed off into the regular Army, again for periods fixed in theory but not in practice.

In the 20th Century we have had conscription.  In theory this is not forced labour but during my time at least I would have argued that it was.  To argue or disobey could mean time banged up which added to the length of the service. Military service meant that some did not come back, or did as casualties.  But this is true in the past of some of the more onerous and demanding types of forced labour.

One person I knew, whose calling was to be a minister of a dissenting congregation, did not do this service but was obliged to spend three years working in a mental hospital to discharge his liability. The common element is being forced under law to give time or even a life time to work that you did not choose and perhaps did not want to continue with.

It has long been my opinion that our honours system is well overdue for revision, going back even to the 60's. At the present, what is a grim irony, is that some of those who complain about the past have clothing and footwear that come from the Far East from factories and locations whose labour conditions are little different to those of the slaves of the past.