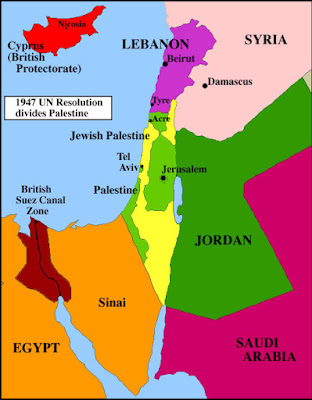 There has been comment recently about Anti-Semitism in the Labour Party and elsewhere. The form it has taken relates to how things are now, but there is nothing new about this. It would take a long post to go through it all from the Middle Ages to the 19th Century.  Then the Tsar's of Russia expelling populations with the effect on other countries that in many towns in Britain had the effect of sparking resentment and antipathy.

After this came the relatively recent history since the First World War. When Britain came away from the Versailles Conference and treaties with the Mandate for Palestine there may have been rapture in the chapels and valleys of Lloyd George's Wales that Jerusalem was now cared for by the wise and just UK.  The reality was very different.

Wikipedia has an article on this, Mandatory Palestine if you have the time to read this long and complicated article. To fully grasp it will need many clicks on a lot of the links. Twenty five years after LG's triumph at the negotiating tables we fully realised the scale and nature of the disaster he had visited on us in the late 1940's.

For my generation of conscript soldiers, Palestine, along with Malaya (then the Straits Settlements) and Korea were at the top of list for being the worst places to be sent to. Other Middle East locations were also highly placed. Yet we all knew about what had happened in Germany.

I recall early in 1945 going to see a comedy film only to be faced with the Pathe news from Belsen-Bergen. It was 11 Armd Div that arrived there and I can imagine what they had to deal with.  A few years later I was with 7 Armd Div and the location and nearby garrison were in our area. Indeed the 4th Hussars were there, Churchill's regiment of which he was the honorary Colonel in Chief.

Yet various forms of Anti Semitism were common enough in Britain.  Only months after the end of the war I was at a variety hall when on came a comic for his usual routine replete with Jewish jokes. Did it ever occur to him to change the routine? Did it not occur to the management to haul him off?

The Suez Crisis of 1956 was part and parcel of the troubles we took on ourselves in the Middle East. Mercifully, I was not there but I did see the military files. My mate, the General Officer Commanding, who had commanded a Parachute Brigade at Arnhem in 1944 had visits from Montgomery, his old mate, and Hugh Stockwell who had drawn the short straw of being the British Commander having done time in Palestine not long before. My experience is that what was in writing and what they said to each other were quite different things, but Stockwell had the politicians and the gung ho French to deal with.

A few years later a friend, good honours degree and a fine teacher was advised that because he was a Jew, apart from a handful of areas in London and a couple of towns he had no chance of being a Head or Deputy. From the school I attended the few Jewish pupils went into traditional medical etc. work but none could expect jobs say, with the local authority or in some areas of professional work.

So what has happened in the last half century? Perhaps there  a couple of decades when this was relegated or began to be forgotten and even the BBC cut out the Anti Semitism routines in its comedy shows. Now it is back for a simple reason. In a way we are recreating the old Palestine problem in our own back yard.

For some 160 years or more we have been involved with the Middle East and elsewhere and seemed to have learned nothing. It was inevitable that encouraging large scale Muslim movement to come to the UK would bring with it a new cultural dimension and revive an old one, Anti Semitism.

As soon as enough had the vote we would have politicians and others for whom Anti Semitism would become necessary in their personal interest.