Sing A Song Of Soccer 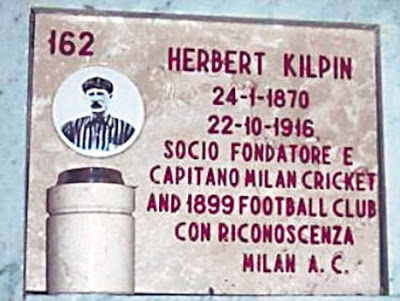 Looking for something completely different, came up with the news that Nottingham will mark the centenary of the death of Herbert Kilpin, a founder, possibly the key man, of the AC Milan football club, one of the greats of Europe.

Given the British upper classes fascination with Italy and its culture I assumed that he would be one of those or at least the younger son of a clergyman, wrong again.

It was not the case. In fact he was of humble origins. He was born in a butcher's shop, his father, Edward, being the butcher, before becoming a leading footballer, perhaps a high protein diet might have helped.

From the same patches as his family a more recent football personality has emerged, Gary Lineker. It is only an outside chance of a any connection, although some of that name were around the same place at the same time.

Before become a butcher, Edward was listed as an Ag. Lab., that is an agricultural labourer, as I have said the holy grail of ancestry.  Moreover his wife, married 1854, Sarah Smith, was the daughter of an Ag. Lab.

The Kilpin's were sons of the soil and no doubt proud of it. Edward was born in Stoke Goldington in Buckinghamshire of a local yeoman family.  The Smith's were from Baggrave in Leicestershire, not far from Lineker's Thurmaston.

And now Herbert Kilpin is buried among the good and the great of Milan and of Italian music, culture and thought.

Did he ever have tickets for La Scala?  If he was at the disaster of the world premiere of "Madama Butterfly" on 17 February 1904 he might have been given more applause than the opera.