He Nose You Know 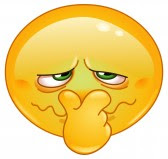 The news that Ms. Samantha Cameron, spouse to David Cameron, a former Prime Minister now languishing among his financial advisers, is to confirm her status as a celebrity in her own right by lending her name to a brand of cosmetics, personal stuff and deodorants is perhaps not entirely a surprise.

What a pity she did not do this a few years ago.  What fun we might have had with the idea of "Stinker Cameron" at the head of government responsible for all those decisions on trade, industry and the environment. The imagination might run riot, but I am not up to it today.

No doubt some of it will be called "natural" which means a little Ho2, as distinct from HS2, and the odd dash or so of concentrates of the juices of some flowers or plants.

Most of the content and engineered to carry far and hit hard will be synthetics of standard kinds of the petro-chemicals available in bulk from a refinery near you.

In effect the reality is that the overall impact of these wonders of personal appearance will be much the same as sitting on a motorway stuck behind a line of trucks which have not been serviced for some time.

As to the content there is enough information out there to tell you what you what it is. It is of course a commercial enterprise to promote increased GDP, aka your money and very likely your rising debt liabilities.

There is a good deal of debate about the overall health and living aspect of all this stuff which has been marketed in recent decades. How typical of Cameron it is that in his mission to be with it and popular and impress people he has now moved on to poisoning the planet.

Are we paying him for this?