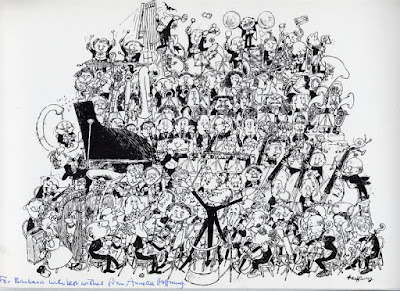 This week in deepest Birmingham at the Symphony Hall has been more Boulez that Beethoven and has seen the birth of yet another new political party to replace The Conservative Party. It is the Consbour Dimocrat Party, the short form being Conrat.

It's essential purpose is that it will be a party that is all things to all persons that will spend more with less money from tax while at the same time observing due economic care.

Quite how this will be managed is apparently a mystery to many in the media.  But last week's "Private Eye" which gave a lot of space to the business history and personal background of Amber Rudd might suggest that imaginative finance is the key.

Ms. Rudd is now Home Secretary, which is not finance, but may enable her to prevent undue interest and actions in these matters should anyone be so foolish or unwise to think about it.  She was canny enough to grab the headlines on immigration issues which has kept the media and many others excited.

There is also the Health Service.  Our NHS lately has taken to employing more spin doctors than medical doctors. With the mortality rate rising and the and the health standards falling it is proposed to train more medic's rather than importing them.

There was once a time in a past age when the local GP's had not only men but often with Scots or Irish accents.  If you could not find one in the surgery you could always try the bar at one or other of the local rugby clubs.  These happy times have passed. Now the ones we have spend time crouched over their laptop screens wonder what on earth their patients may be suffering from.

If they are not very good at this there is a real risk that they could be looking at web pages dealing with animal health or treatments in the medieval or ancient world.  Usually, they see a pop up advert' for a pill and prescribe that, however, which is what they are supposed to do.

Little seems to have been said about foreign affairs beyond just how much we will be under the rule of Brussels, Berlin or Deutsche Bank, or rather the financial imperatives of bailing them all out of unwise and over optimistic decisions of the past.  The bank has a lien on the freeholds of many thousands of UK properties, but don't mention that to the leaseholders.

The real question of the day is when the Prime Minister of this new party, Ms. May might decide to have a General Election.  One opinion on this is next Spring.  But if my reading of the world situation is right she ought to go for it as soon as possible.  A delay might mean she is the new Gordon Brown rather than a Tony Blair.

Blair was always a Conrat at heart, but did not like to say so in public.