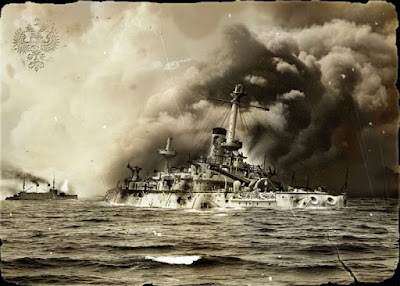 England awake! The Russkies are here, their navy manned by men with snow on their boots is off our shores just now. The last time their Baltic fleet headed East; back in late 1904, when they arrived off China in 1905 the Japanese navy blew them out of the water. Now they are headed for Syria with only what is left of the US Navy to inflict any damage.

Before they got out of the North Sea in 1904 under the impression that the Japanese Navy was waiting for them; communications were not so good then, they sank two English fishing trawlers out of Hull. Mercifully thanks to the great and good of the EU this is not likely to happen, we do not fish these days.

As they pass we have the services of the voluntary RNLI lifeboats to rely on, mostly. They will fish out any wobbly Russian sailors who fall overboard after the vodka ration and are unused to being at sea. Some may jump overboard to join all those refugees anxious for benefits and needing advice as to the nearest nightlife.

There is claimed to be a Dragon Destroyer, apart from a couple of border control boats with limited distances, that may "shadow" them.  That is, unless it gets choppy off the Scillies or rough in the Bay of Biscay. In any case it cannot go far, the ECHR about to rule that active servicemen with pets must be allowed time off for reasons of first, animal rights and secondly, human rights.

What will happen off Syria is an interesting question. What we should have firmly in our minds that all those people with all that military hardware are prone to hitting the wrong targets and often inflicting self damage. So the USA does not have only the Russians to fear, "Hit the button" Hillary could soon send half her navy to the bottom by accident.

Back in '05 many other things were happening. In Odessa there was that business with the Battleship Potemkin and in St. Petersburg, The Winter Palace. The Kaiser went to Morocco and upset the French. In France a research psychologist named Alfred Binet, wanting to outdo the Freudians, claimed that intelligence in humans might be most easily be measured by mental agility tests rather than by traditional education and examination notably in the classics.

Back in December '04 the "Missionary Of The Empire", Unionist Joseph Chamberlain, the Harriet Harman of the day, they are related, went to the East End to persuade the masses who were enthusiastic to his cause, thousands of them attending. They cheered his demands for curbs on immigration from Europe which he asserted was responsible for crime and disease.

Meanwhile, between Baker Street and Uxbridge the Metropolitan Railway had introduced electric trains and salivating dogs had won a Nobel Prize for Ivan Pavlov.

The big news was the play "Peter Pan, The Boy Who Wouldn't Grow Up".  Nowadays, they go into politics.