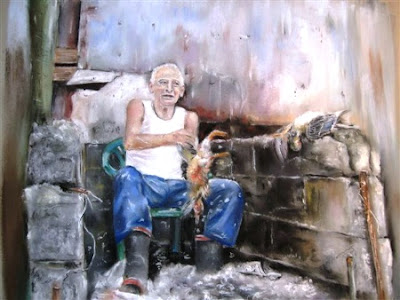 Today, I had an interesting conversation about the backsides of ducks, or rather drakes. It started as one about duck eggs. These are produced by female ducks whiles males are only good for making a lot of noise, breeding and then eating.

If you want to produce duck eggs therefore you need females. However, for the unwary or hasty when offered ducklings for sale it is very easy to find yourself stuck with useless males (where have I heard that before?) because the sellers pluck out the identifying feathers from the rear of the males.

Rogue trading therefore can know no limits to which traders will not stoop as any duck plucker can tell you. Today, we learn of the billions dollar bilker of UBS who was discovered not by ongoing audit, management or accountancy or any of that foll de roll but because the bloke concerned went to a boss, coughed a couple of times and the coughed the lot about his many errors of judgment.

My question is how many more of them are there out in the trading rooms or huddled over home computers bringing about the end of capitalism a lot quicker than any Marxist campaigner ever did. There is a long history of people like this as well as corporations, governments and religious organizations that have ramped all humanity in generations past.

For the most part, humanity just suffers it and accepts that greed, if not good, is always there and to be on your guard. There are laws and systems of justice that are supposed to deal with but quite often do not if the rogues are powerful and connected enough to avoid trouble.

When humanity does take action and often extensive and dangerous action is when the trading in food becomes disrupted or destabilised by the actions and dealing of people who knowingly distort the market pricing.

The latest Ecologist newsletter that landed in my mail box this week has a lot to say about what it claims is happening at present and two links on the issues are given below.

What the media have said little about in the many disturbances around the world is how many of them are triggered not so much by political belief but by the fact that world food prices may be rising at levels that put real pressure on the incomes and standards of living of the poor.

Moreover, it is not just the poor that are feeling the pinch. The prices impact on the middling orders in a variety of ways notably in their patterns of spending. The less you have to spare when the food has been paid mean less to spend on other consumer goods. We, like others, have discovered that our food is costing much more and requiring reduced spending elsewhere.

In the developed west in the recent past we have had cheap food and for many the food bill has shrunk as a proportion of our living costs. This may well have ended and we are faced not simply with natural food price rises but the effects of an out of control trading system across the whole food supply chain.

In the foreseeable future it could be that our rioters will not be looting shops for fancy goods and gizmos but for bags of spuds and any cabbage they can find.

Perhaps how to tell a plucked drake from a duck needs to be taught in schools.
Posted by Demetrius at 17:37