This Is Cameron Enterprises How Can I Help You? 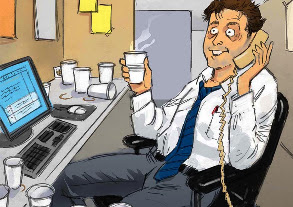 With all the gathering gloom and everyone climbing on the economic disaster bandwagon it is time to look at things on the lighter side. One hilarious item was the reports that our Fifty Best Businessmen will each be given a “buddy” in government to help spur our economic revival.

Given the track records of some of our designated “best” businessmen of recent years then the chances are that what the government could get would be quite the opposite. It would not be the ascent of the mountain it would be down faster than your average downhill skier could manage and just as likely to end in a pile up.

What is striking is how quaint a notion it is. In the USA they are much more organised and caring about such things. The Supreme Court, I believe, will have no truck with limiting political contributions or restricting such activity. So there is a free market for both politicians and political favours.

The difficulty in the USA is that so many politicians are damaged goods and are unreliable in use, but by and large they satisfy their purchasers. That what appears to be the US Constitution and policy turns out to be very different from what really happens out there and who benefits is another issue.

The “buddy” principle to us what look at some history is an abiding feature of British politics. Know your friends and know your enemies and anyone who is not your friend is an enemy has been the basis of political interchange in Britain these centuries past.

One of the classic illustrations of the “buddy” principle at work emerged in the Marconi Scandal of 1912. Another is how Britain dealt with some things. Rothschild gold helped win the Battle of Waterloo and in Disraeli’s time the same family coughed up £5 million overnight for us to buy into the Suez Canal and Egypt. More recently Peter Mandelson became their friend.

Country House weekends have been a fixture in all this for a very long while. At one level the Cliveden Set operated and other levels different gathering in many places.  Amongst the Tories and old Liberals it was a matter of which club you joined. Also for many Tories which Hunt and which Grouse Moor you joined could be important.

Canny businessmen would join the favoured haunts of both parties. When Labour became the other party it became more intricate. For someone around then the quiet cosying up of the business chiefs they liked to many of the government ministers was little secret.

This could put someone in an embarrassing position. My parents bought me a Gannex raincoat as a wonderful Christmas present to make up for all the treats not available during my childhood and later years. How could I explain to them that this branded me publicly as a fan of Wilson and his more opportunistic business friends?

Perhaps for a time at the end of the 20th Century all this disintegrated to some extent and there was a scramble for other ways and means. The Blair centralisation of political influence also restricted the market. Now it seems more open but the essential structures for contact more uncertain. It is unlikely to be the open and free market of the USA.

Given the performance of many call centres to day I hope our Best Businessmen do not have to put up with what ordinary people have to endure and make the right kind of contact in the right way.

If everything does go bad what happens if the Cameron Call Centre is outsourced to Shanghai?
Posted by Demetrius at 17:37