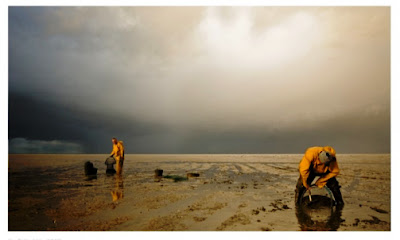 Not long ago there was a tragedy in Morecambe Bay when a large group of people brought in to pick cockles were swept away by the incoming tide. They had little or no experience in the conditions at the Bay and neither did their gang masters. They were there to serve the demands of distant traders and others in the food supply business.

For those who know it or know about it the Bay is notoriously dangerous and can catch out even the most aware and cautious who go out on to the mud flats. There is the unpredictable movement of the waters coming down from the watershed going out by changing channels.

There is the mud and sand which is constantly changing its shape, form and mix. Above all are the tides which can go far out leading to a false sense of security. Because when they come back in they are racing faster than a man can run and how fast and high will depend on season, winds and water.

So those who know the Bay and depend for their incomes either on guiding people or picking cockles or taking other forms of seafood need to have knowledge, their senses fully attuned and an innate caution and readiness to leave at any hint of danger. Some may say they regulate themselves, they do not they are ruled by the forces of nature and need to know that.

If you apply this thinking to the world of finance and the politics that bears on it then explaining what has been going wrong is a simpler task. Those in charge of very many of the financial organisations, public sector or private, did not know what they were getting into. Their gang masters (senior executives) often did not tell them what they were doing, they just delivered the results.

The gang masters themselves thought it was just a question of getting there first, taking out as much as possible and that they could control the situation. The authorities who might have reminded them of the potential complexities and dangers did not.

They thought they had found ways of changing nature, or of exerting absolute control over the elements by decrees or pumping water (money) in or out according to formulae which they were assured were mathematical certainties. In the Bay, the tide tables are a useful guide but you need to look at sky, water and the mud to judge what can happen.

Financially, when the weather changed for the worse and the conditions began their usual shape changing under the various pressures then the tide started coming in and to their horror began to sweep away their pickings.

What we have going on now is that some are running, some are seeking advice on how to get out of the quicksand they are in and some are piling up mud to try to stop the water.

There may be a few that survive, others might be rescued, but who and to what effect is far from certain, the incoming tide has not finished and it is a high one.

And for us, the customers, there are going to be many fewer cockles to be had and we might not like the taste.
Posted by Demetrius at 16:45