Choose Your Own Disaster 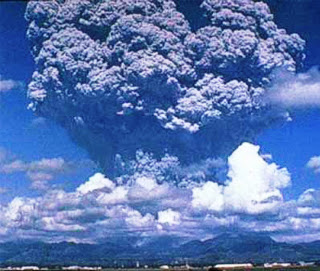 Not many days ago a group of geophysics experts and scientists gathered in California to discuss the prediction of earthquakes. After many fine minds have worked and studied the issues a good many feel that whilst it may be possible to identify the areas of higher risk, accurate prediction is unlikely.

Inevitably, the ancient gods then decided to show them who was boss to hit Washington DC with one large enough to shake things up a little. Just to add a touch of interest they have sent in a number of hurricanes and typhoons to make the point. One, Katia, is said to be on course to visit the UK in the next few days.

At about the same time another group of experts declared that the possibility of a volcanic eruption disrupting air travel was unlikely for a while to come. Within days Katla in Iceland became twitchy. This one could be bigger than last years and have widespread effects.

But there is another much bigger and more dangerous one that has signalled a swarm of minor earthquakes. This can be a precursor to an eruption. It is Mount Tambora in Indonesia.

Just put Mount Tambora 1815 into search and see what it can do. 1816 was “the year without summer” and the dire effects lasted rather longer than that. If this one goes up with a full eruption it could be a world disaster and not just one that causes some grief in the airport waiting rooms.

There are other seismic type events and some of those who follow finance and money in relation to chaos theory and collapse dynamics like to see patterns. When what seems a minor event or arrangement occurs what can happen.

For one in this area take a look at the treasureislands.org website run by Nicholas Shaxson and the story today, Friday 9 September about “Britain, New Offshore Gateway To China”.

A tale about the renminbi is not as immediately exciting as a big bang of one sort or another. But if what is happening does indicate the attempt by China to establish its currency as the world’s reserve instead of the dollar then it will mean immense changes to the whole of our thinking and ideas about world finance.

What it also means is that the UK is deserting the USA and tying itself to the Chinese financial system via the City of London. This is being done by stealth.

Our only hope is that Tambora will see off the present world financial system in the disruption it could bring. It has done it before and can do it again. According to Subrosa, if the clouds clear you could see a supernova out there tonight.

In the old days this would have been seen as an omen of the gods.
Posted by Demetrius at 17:22