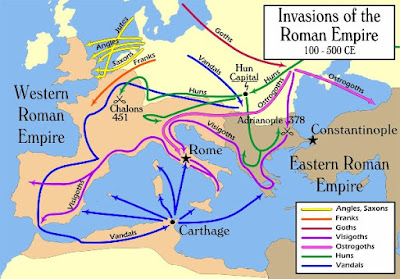 You may or may not have noticed that the debate on the who's and what's of Europe has become a feature of present politics and debate. Were I to suggest that you could not really understand what is going on unless you were familiar with the detail of the 16th Century Council of Trent (see Wikipedia) it would not be helpful. I first came across this in the late 1940's and have yet to come to terms with it.

This is despite being in Paris at Easter in 1951 changing stations at the time of the first great meeting to conjoin economies by dint of bringing together control of the major industries. Worse came in 1955 when in Germany we were instructed to stop behaving like lords and masters and start being polite because we were now guests. I knew then it would end in trouble.

Down the millennia the Atlantic Isles has not been able to retain a separation from mainland Europe because people do move around. Especially people with weaponry, a thirst for land and control and often a wish to want others to believe in the same god or collection of gods as they do. Many have come, but never gone; they are here in our genes, which might explain our confusions.

What we have in Brussels at the present is yet another imperial construct, a collection of power and status seekers who have come together to play off the rivalries and political and economic weaknesses of a Europe that having lost world control or status is now scrambling to stay as more or less nation states.

History tells us, however, that once a central mighty power achieves wide and effective control it never lasts. The ambitions of power seekers and others lead to disputes and failures of decision and those who actually administer the territories lose sight of their purpose, then it all begins to fall apart.

When this begins to happen, as it might be so now, then the central ruler or administration becomes more and more frantic in proclaiming new laws and rules. Because of the problems of application and management Europe wide, it only makes matters worse.

Provinces and sub divisions breaking away from existing states may apply to the centre for recognition. But that does not last and degenerates into decades of wars, conflicts etc.. These will be worsened by one ruling group or another importing people and especially fighting men or persons of other faiths to act in their support. Often, too often, these inevitably become new controllers in time and less interested in Europe and wanting to create a new entity.

Once begun these changes cannot be stopped because where the remnants of control still exist at the centre they are incapable of either securing agreements or organising and using force to maintain their control.

For the UK in the late 60's and early 70's Heath and Wilson and others saw Europe as the way out of our then mess. Half a century later we are on course for a time when there is no UK and no Europe.