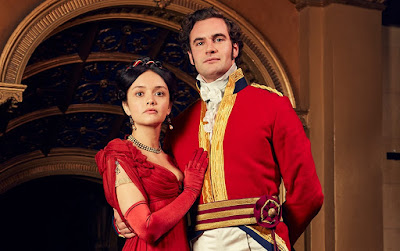 Watching the new production of "Vanity Fair" and hoping the screening is enjoyable, so far so good. I am not too worried about how precisely it is taken from the book, this itself was something from Thackeray's imagination. Or was it?

The dating of the original is 1847 and 1848. We will have some idea of the history of the times and the society and politics. What is striking is that the book is apparently so detached from all this. But it was not a "popular" one in terms of our own times.

It is a book written to sell well, Thackeray needed the money as much as any scribbler of his times did. Also, it had to appeal to a readership. But this was an age when very many were not able to read and some of those who could might not afford the cost of buying much in print.

This limited him to the upper and middle classes and this was a book about those who were not at the top, but the many strivers and hopefuls among those who sought status and wanted to join them, or at least enjoy their same living standards.

They, the later generations and we could only guess at how far his characters are imaginary or if not, who might be the people that his takes for them, give or take changes of names, the reality or ensuring that they could not be identified too easily, up to a point.

This was a period when changes of surnames could and did happen to a greater extent than we could imagine. A practice that has become the dread and curse of family historians and genealogists of the present. It was either to get a step up in social recognition or required of a family settlement, or will, or marriage.

One feature of the book is that Rebecca Sharp, "Becky", who has fluent French is anxious to remind people that while she may be of lower class he mother had Montmorency forebears. The Dukes of such had been at the peak of society in royalist France. But trawling about the web I found the item below.

Major Hervey Randall Saville Pratt de Montmorency was born in September 1782. He was the son of Reverend Joseph Pratt and the Hon. Sarah Morres and died on 20 September 1859. He was born a Pratt but on 27 September 1831 added the de Montmorency by Royal License on succeeding to the estates of his mother's family. He held the office of Deputy Lieutenant and lived at Castle Morres, Aghaviller, County Kilkenny, Ireland.

Another of the surnames can be considered. There is the George Osborn son of the grasping financier John Osborn. In the late 1840's there was an M.P. in Parliament for Tipperary named Ralph Bernal Osborn, see Wikipedia, a Merchant Banker, who during the Irish Famine firmly believed it was right and proper to evict tenants.

The surnames of Dobbin, Crawley and others can be found among the lesser Irish Gentry who had a reputation for seeking moneyed marriage to preserve or improve their status. Sedley is difficult but there is a solicitors clerk in The City and Thackeray was a barrister.

This could become complicated as you wander into the forest of connections and who knew who etc. and try to find The One. All I can suggest is that Thackeray picked out names from here and there with no particular plot or meaning as so many writers would do.

For example from the world of Thackeray you might start with the Duke of Wellington, who was closely acquainted with Queen Victoria who held him in high respect. The daughter of an clergyman and sister to one of the old hands from his days in India was placed at Court and become one of the beauties of her time.

The clergyman had a large family from his two marriages the eldest of whom married a Liverpool merchant. Another married well and a daughter became Countess of Antrim, a McDonnell of McDonnell whose granddaughter married John Bowes Lyon who had a sister, Elizabeth, later Queen.

In the present day I wonder if some of the Liverpool McDonnell's are either related to or connected to people whose names appear in Vanity Fair?