Jeremy Gets The Noddy 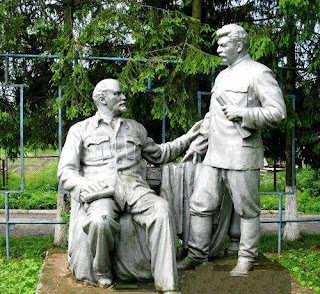 The lessons of 1914-1918, the war to end wars and 1939 were that a nation or nations should not be caught out short of troops, equipment and above all general staffs with plans and intelligence.  For that reason the western powers created the North Atlantic Treaty Organisation, NATO, in 1949. In the event of war with the Soviet Union the West needed to be ready and able to operate from Day One.

Jeremy Corbyn, leader of the Labour Party, claims that NATO when founded was for war, aggression and attack on the East. In 1949 he was born to add to a family whose parents were posh Lefties of their time. Their pad, in one of the nicer and more traditional parts of England, had been bought from the Duke of Sutherland's estate. They were the Leveson-Gowers related to absolutely everybody who was anybody.

In the mid 1950's the government gave me a uniform and kit and sent me to do my bit for NATO.  Luck put me in an office with high security files which helped me pretend I had work to do in between NAAFI breaks and meal times. So I was very familiar with NATO.

In the USSR there had been a major change, Joseph Stalin in 1953 had gone to join Lenin in the great committee in the sky and there was a lot to worry about. Stalin had been a threat and meant to be, his tactic was to hold the West in a thrall of fear by means of troops stationed on the borders of its subject states ready to go.

We had to be out and off inside 24 hours. I knew the move orders, in fact for our formation I typed the things, and it had to be right in every detail and particular, especially all the map references and routeings. What I am crystal clear about was ours was a defensive strategy, up and run back faster than the Soviets could move forward for us to then assemble and dig in the defences.

We were one of the lead and first crack divisions who were to take on the Soviet Shock Army that would be our opponents. We spent a lot of time on exercises to see how and if it could work and in particular to stimulate Soviet radio clatter to help our intelligence.

What was happening in Europe in 1949? France was divided, the Communists and the Gaullists rivaling each other with a group of Republicans in the middle whose basic appeal that they were neither. Major strikes in France and other disruptions were common in this period. Germany was still an occupied territory and would be for a few years more.

Holland was losing its Empire with the creation of Indonesia and other changes. Belgium was divided between its parts and parties, resulting in the return of the monarchy. Spain was still in basic recovery from the Civil War and Italy was trying to come together again. Italy had lost its empire and had a large communist party.

The UK had a Labour government, ostensibly moderate Socialism but out there in the constituencies and certain major urban areas there was a hard Left, allied to communism, entity that were always a potential threat had they decided to try their luck. the UK was in full retreat from Empire and also strike prone in major industries.

In short there were a collection of governments, already hard pressed and uncertain in many areas. Had Soviet Russia decided to move forward or launch a full scale attack if the European nations were not prepared and without a command and organisation system they could not have done it in the time available, let alone finding the troops.

NATO was the answer and one based on the need for defence. After Stalin died in 1953 it was all the more important because there was then an era of uncertainties as to what the Soviet Union might do and who might really be in charge. What did altar military planning later was the creation of battlefield nuclear weapons in the 1960's.

It was between 1949 and 1963 that Enid Blyton published the Noddy books, so Jeremy might well be a Noddy man. His teenage years were those of the 60's, perhaps his mind was on other things at the time?