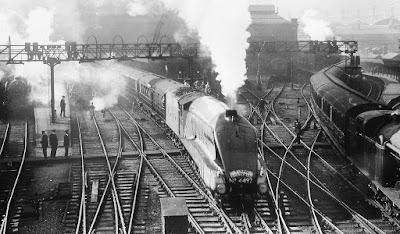 In telling history to those of the present we have to be selective and it is usually what might be most interesting and critically what might have had most attention from the media at that period. That period media in turn would be drawing on limited sources and reflect its ideas and prejudices.

This article in "The Engineer" refers to 1935 and the introduction of the A4 Locomotive Class in the LNER, designed to pull high speed trains to and from London Kings Cross, the North East and Scotland, in addition to ordinary services. It was advanced steam technology and it captured the attention of the public.

This was when we had an Empire and liked to think that Britain ruled the rails. We had led the world into the age of steam and once there hoped to command it for generations to come. It did not last even my generation and now we tell ourselves how good it was when the new A4 "Mallard" left the Doncaster works in 1938 to become the fastest steam locomotive in the world.

A decade later I was on a special train pulled by this locomotive and it was was to be a great day out. Sadly, it broke down and had to be replaced by a lesser one, the standby one in steam at a local engine shed and designed for slow freights.

There were only 35 of the A4 class built and few streamlined on other railways, the LMS had a parallel class; the Coronation, of which some were streamlined. But these locomotives were not all that they seemed. For one, the external cladding to the boiler of the streamlining may have added a few miles per hour running, but when any work needed to be done it was a bigger and longer job.

Another was that it added cost per locomotive as well as weight, which meant more firing was needed, my source for this was the firemen. It may have allowed the public relation teams to wax eloquent, but my experience was that the drivers and firemen had a more cynical view in that the actual number of miles on which higher speeds might be attempted was limited.

Long distance trains with limited stops meant that water had to be taken in to the tenders, the coal and water supply part from troughs between the lines. It was no easy business to get the collecting spout down and up again exactly as needed. Moreover, the speed at which this could be done was much less than that for normal running. So the fast stretches were matched by slow ones for water, as well as complex junctions and going through some of the local stations.

Not least in a railway system which had over 25,000 steam locomotives dating back to the 1870's three dozen or so with streamlining may have looked good in the media but didn't do much for the overall budgets.

The mass of the population were on stopping trains both long and short distance. Also you did not need expensive high technology etc. for the freights and shunters. The reality of the railways was long clanking coal trains and other heavy freight bringing in the revenue, parcels and newspapers, stopping trains, workmen's specials, commuter and connections to more isolated places.

Yes, we did like the A4's, I recall making journey's in the hope of having one of those or a Coronation on the front. I can say I knew them, but the trains took just as long, they were just as crowded making going to the toilets difficult and the other passengers were just as sweaty and ill tempered as track works here, delays there, being held up at stations and breakdowns made for the inevitable late running.

It is no surprise that among the realities during the 1930's and after my parents generation and my own longed for the time when they could just buy a car and go when and where they liked.