Another Centenary Another World 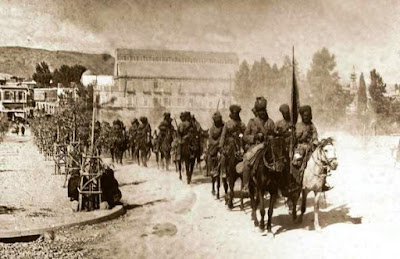 In September 1918 the Middle East was changed forever in the critical battle between the Turks and the British, that of Megiddo.

It could be argued that this was the beginning of the long period of conflict and strife which has occurred after the collapse of the Ottoman Empire.

This article in the National Archive blog tells the story. It is not long but complicated and clear. It is something that few people today know about and is absent from many of the histories of the First World War and later.

But this campaign helped to create the new states and systems that followed and became the Middle East of today.

The regiment pictured above is the 9th Hodson's Horse, Bengal Lancers, a key regiment in the battle.

In Hebrew, the name is Armageddon.